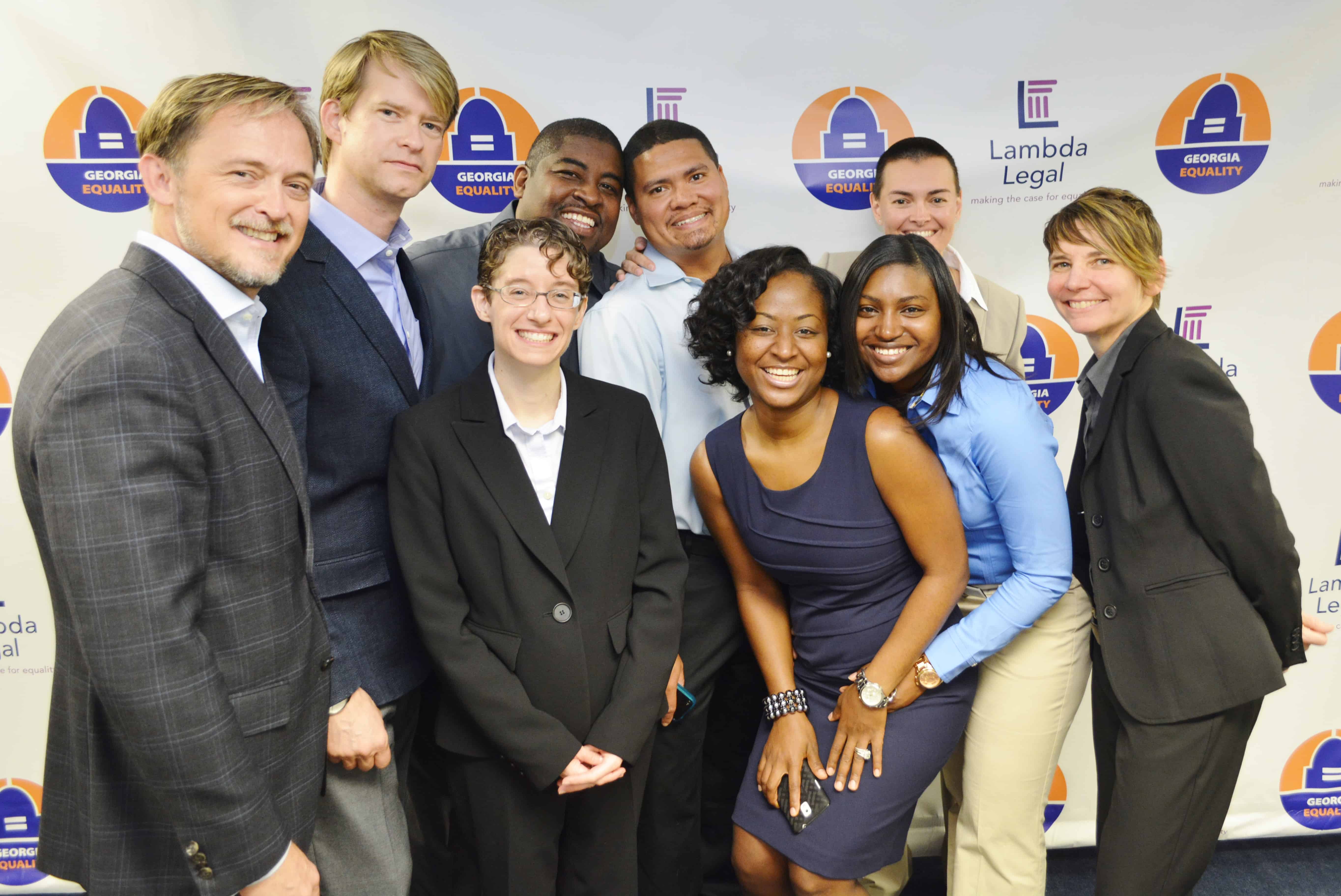 A federal judge has denied the state’s motion to dismiss the lawsuit challenging Georgia’s ban on same-sex marriage.

The 49-page ruling in the Inniss vs. Aderhold case was made today by U.S. District Court Judge William Duffey.

“This shows the state’s position is doomed,” out constitutional scholar Anthony Kreis told the GA Voice. “It’s not a perfect victory but it’s what we needed.”

The lawsuit was filed by LGBT legal group Lambda Legal on behalf of four same-sex couples and a widow.

“The ruling gives our plaintiffs and all same-sex couples the opportunity to be heard in court and ensures Georgia is on the right path of history sooner rather than later,” she added.

It’s fair to say Duffey “recognizes the writing on the wall,” Litrell added.

“Even where his decision includes some reasoning we disagree with … such as the fundamental right to marry … at end of day he has tasked the state with showing how denying same-sex couples the right to marry furthers the state’s interest in child welfare,” she said. “And because there is no logical connection … the state is destined to lose.”

Next steps? The state could appeal Duffey’s decision.

Generally with lawsuits, after a motion to dismiss is denied, both sides move into the discovery phase—such as deposing and interviewing expert witnesses. However, most same-sex marriage rulings have been made via a motion. Lambda Legal or the state could soon make a motion to decide the case, but Littrell said there is no timeline set.

The decision obviously does not mean same-sex marriage is legal in Georgia, at least not yet. But now the case can move forward.

But with his decision today Duffey indicates there is enough reasoning from the plaintiffs for a case.

“There is a case. The judge is not striking a ban but he is saying there’s enough there to strike the ban,” Kreis said.

While Duffey did not find much validity in many of the plaintiffs’ claims, he did specifically note the plaintiffs’ argument that children are harmed when their same-sex parents are not allowed to marry. This is significant from a well-known conservative judge, Kreis said.

The Amended Complaint [plaintiffs’ lawsuit] specifically alleges that prohibiting same-sex marriages harms the State’s interest in child welfare, and that the exclusion does not offer a conceivable benefit to children of opposite-sex couples. It contends that scientific consensus shows that children raised by same-sex couples are as well-adjusted as those raised by opposite-sex couples.  It asserts further that excluding same-sex couples from marriage humiliates their children, and denies those children the ability to understand the integrity and closeness of their own families without offering any conceivable benefit to the children of opposite-sex couples. At this stage of the proceedings, the Court is required to accept these facts as true and consider the allegations in the Amended Complaint in the light most favorable to Plaintiffs.

Defendants’ Motion to Dismiss the Amended Complaint does not address how Georgia’s asserted interests in child welfare and procreation are advanced by the State’s prohibition on same-sex marriages, and the State’s refusal to recognize lawful marriages performed in other States.

State Attorney General argued in his motion to dismiss some of the tired arguments made by other conservative attorneys general—that same-sex marriage harms families and children cannot be raised by two parents of the same sex without being mistreated.

“The challenged laws define marriage as the union of man and woman,” Olens argued in the state’s July 21 motion to dismiss. “This definition furthers the State of Georgia’s legitimate interests in encouraging the raising of children in homes consisting of a married mother and father; ensuring legal frameworks for protection of children of relationships where unintentional reproduction is possible; ensuring adequate reproduction; fostering a child-centric marriage culture that encourages parents to subordinate their own interests to the needs of their children; and exercising prudence before departing from the heretofore universal definition of marriage.”

Duffey does make it clear, and agrees with Olens, that he does not believe the plaintiffs have the right to marry.

“The Court concludes that Georgia’s marriage laws do not implicate a fundamental right to marry a person of the same sex,” he writes.

He adds, “Georgia’s marriage laws prevent a person from marrying someone of the same sex. They do not discriminate against men or women as a class.”

Kries pointed out that Duffey probably doesn’t really want to be part of this same-sex marriage fight but the 11th Circuit Court, which granted marriages to begin this week in Florida, and the Supreme Court, are sending strong messages that they do not support same-sex marriage bans.

“It seems to me he is a conservative and isn’t really looking to go out of way to make any kind of ruling,” Kreis said. “But he is also not a stupid man. The 11th Circuit Court [Georgia is part of the 11th Circuit] by allowing marriages to continue to go forward in Florida sent him a strong message that it will not uphold the ban.. he has the 11th Circuit Court breathing down his back a bit and the Supreme Court has really signaled it is not wanting to uphold bans.”

“We congratulate our colleagues at Lambda Legal on their great work and success in this case, and look forward to working toward continued success together” said Jeff Graham, executive director of Georgia Equality. “While this in no way indicates the judge’s opinion on same-sex marriage, it is encouraging that even one of the more conservative judges in the district is unwilling to accept the state’s tired claim, based on no evidence, that opposite sex couples are better for children.”

“We are delighted that the Court will allow this case to continue,” Borelli, said in a press release. “We look forward to our day in court to demonstrate Georgia’s marriage ban is unconstitutional and relegates the state’s same-sex couples to a second-class status that keeps them and their families vulnerable.

“Today, after the blizzard of rulings over the last few months, Georgia now finds itself in the minority of states continuing to enforce these discriminatory marriage bans.” she added. “Surely, Georgia state officials must see the writing on the wall. Georgians believe in the Southern values of love, honor and family, but as long as the State of Georgia continues to bar same-sex couples from marriage, it devalues these families and reinforces unfairness and discrimination. These families need marriage equality and should not have to live with a law that treats them as inferior.”

Friday is a big day in the same-sex marriage movement. A panel of judges in New Orleans will hear arguments on marriage bans in Texas, Louisiana and Mississippi in the 5th Circuit Court of Appeals. Also, the U.S. Supreme Court meets to decide if it will hear any same-sex marriage cases.

UPDATE: Attorney General Olens issued a statement on the Duffey’s ruling: “The District Court issued a preliminary ruling on a motion to dismiss on a pressing legal issue working its way through the higher courts. We look forward to further clarification regarding the ability of states to decide these questions. The United States Supreme Court has an opportunity to review this issue and will likely announce its intent in the coming weeks. There are other cases pending in front of the 11th Circuit that will provide a similar opportunity. As the issue remains pending, the office will continue to pursue its constitutional obligation to defend the laws as passed by the legislature and the citizens of the state of Georgia.”