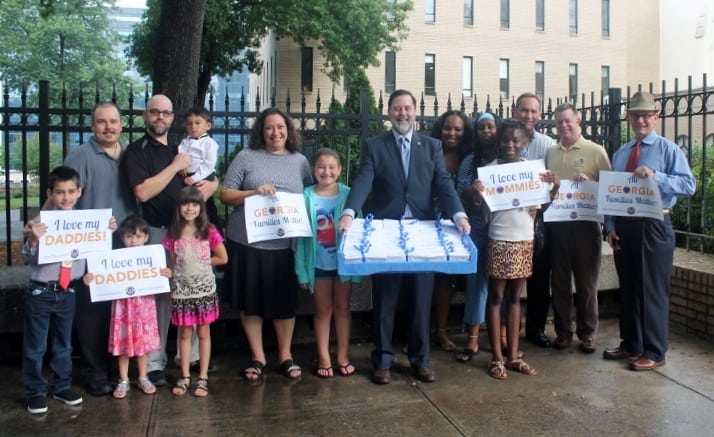 Several same-sex couples and their families, led by staff members from Georgia Equality, delivered 3,080 signed petitions to a representative from Attorney General Sam Olens’ office Monday morning urging him to refuse to defend the state’s ban on same-sex marriage. Olens has until the end of the day to announce whether the state will defend the ban in the federal class action lawsuit filed by Lambda Legal April 22 attempting to challenge it.

The group was not allowed past the security checkpoint in the lobby of the building, instead delivering the petitions to a staff member who came downstairs from Olens’ office.

Val Jameson-Smith and her wife Deresia Jameson-Smith brought their daughter Joy to take part in the action. The couple were married in Washington, D.C.

“I’m a southern girl. I’ve lived in the south the majority of my life and it’s unfortunate that I had to go somewhere else to be married,” Val said. “We really support marriage equality and we’re fighting desperately to have our marriage recognized in the state of Georgia as well as giving everyone else the right to marry.”

Their young daughter Joy echoed her moms’ sentiments, saying, “Their relationship will be complete since we live here. I feel it’s kind of weird that they got married in DC but we live in Georgia. I feel like it’s kind of wrong.”

Attorneys general in Kentucky, Nevada, Virginia, California and Pennsylvania said they would not defend bans on same-sex marriage in their states.