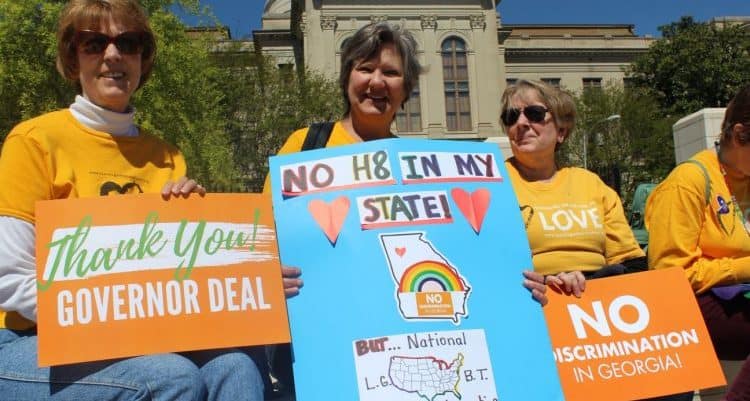 According to the Atlanta Journal-Constitution, the Georgia GOP adopted a resolution on Saturday that “supported the controversial measure without including a pledge” for candidates to back it. This compromise followed a debate at the party’s state committee regarding a proposal that initially called for gubernatorial candidates to pledge their support for a state version of the Religious Freedom and Restoration Act, or RFRA.

The three Republican candidates thus far are Lt. Gov. Casey Cagle — who criticized Gov. Nathan Deal in 2016 when Deal vetoed a “religious freedom” bill that made it to his desk, but earlier this year made it clear that was not going to be on the docket again for the state legislature; Secretary of State Brian Kemp and state Sens. Hunter Hill (R-Atlanta) and Michael Williams (R-Cumming).

Twenty-one other states have similar laws that “will protect people of faith from government intrusion, as well as strengthen legal protections for opponents of gay marriage,” the AJC reported.

Georgia GOP leader John Watson said he was a passionate supporter of “religious freedom” legislation, but told the AJC he would “staunchly oppose” any requirement that a candidate support it. After the vote, he thanked those on both sides of the issue for finding room to compromise.

“What I just saw was a healing process that was very important,” he said. “We’re not always going to agree on things, but I do want to express my sincere gratitude for working together on this.”

RFRA has been an ongoing issue at both the federal and state levels, most recently with President Donald Trump issuing an executive order on the National Day of Prayer regarding the tax-exempt status of religious institutions. During Georgia’s 2017 legislative session, Sens. William Ligon (R-Brunswick) and Josh McKoon (R-Columbus) co-sponsored Senate Bill 233, a “religious freedom” bill that aimed to put a provision in the Official Code of Georgia to reference federal religious freedom accommodations in state law. SB 233 did not make it to the floor this year, and its fate is unknown going into the 2018 session.

Opponents of these bills responded in kind, introducing comprehensive civil rights legislation in the Georgia House and Senate. Though the bills did not make it to the floor for votes this year, they still have a chance to pass next year.