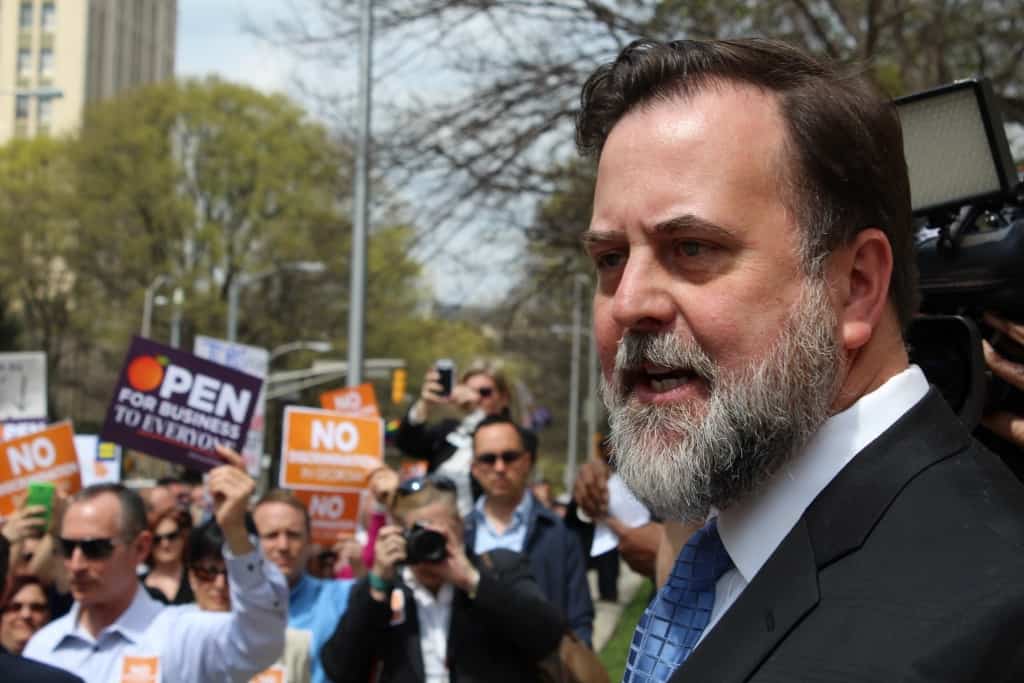 Is there a Georgia ‘religious freedom’ bill path suitable for all?

The biggest sticking point raised in Georgia’s latest fight over a so-called “religious freedom” bill was the possibility that passage of the bill would lead to more LGBT discrimination, with the most often-cited example being a business owner denying service to someone based on the business owner’s religious beliefs.

Lost in the shuffle of the constant back-and-forth arguments, the press conferences, the rallies, the hearings, and the inflamed rhetoric was a simple fact—it’s already legal to discriminate under state law.

“That is true,” says Jeff Graham, executive director of Georgia Equality. “The one big caveat to that is that we have a broad ordinance here in the city of Atlanta and then there are other ordinances and policies passed by 59 other municipalities across the state that offer lesser protections.”

It’s one of the only things Graham and state Sen. Josh McKoon (R-Columbus) seem to agree on concerning the issue. McKoon’s religious freedom bill, SB 129, failed to pass in this year’s legislative session. The bill had passed in the Senate, had momentum and appeared to be on the verge of reaching a vote on the House floor when state Sen. Mike Jacobs (R-Brookhaven) introduced an anti-discrimination amendment during a March 26 House Judiciary Committee hearing.

The amendment passed 9 to 8, with Rep. Jay Powell (R-Camilla) and Rep. Beth Beskin (R-Atlanta) joining all six Democrats on the committee voting in favor. Supporters of the bill warned that such an amendment would “gut” the bill, and it never recovered.

But in the days following the end of the session, McKoon started hinting in various interviews about a way around the issue—have the debate over discrimination, but do it in a separate bill, i.e. a statewide nondiscrimination bill offering sexual orientation and gender identity protections.

“I think that is a fundamentally different debate,” McKoon, who refused to discuss the matter with the Georgia Voice, said on WABE 90.1 FM on April 13.

“I think that one of the objectives of the opposition to this bill has been to create confusion about this issue to then leverage it to try to get us to talk about that issue. There are 236 members of the Georgia General Assembly. I am delighted for us to have a debate and discussion on that issue if any one of them wants to introduce that bill. That has not happened yet.”

The ‘big three’ areas of protection

The strongest nondiscrimination bill would include protections in these “big three” areas—employment, housing and public accommodations.

“Certainly those are the three big areas of concern when it comes to discrimination that need to be addressed before we would feel comfortable with passing some sort of religious freedom bill. That’s what we’re lacking here in Georgia is any mention of state level civil rights,” Graham says. However, he notes, “The legislative session just ended a week ago, so we want to move forward thoughtfully at this point in time.”

Graham also pointed out that there are no protected classes under state law, so an effort of this magnitude would require a broad coalition of communities to come together to pass a bill that protected all of them.

Rep. Wendell Willard (R-Sandy Springs), chairman of the House Judiciary Committee, says he’s ready to talk about a statewide nondiscrimination bill that covers one peg out of those “big three.”

“We do not have in Georgia what we call a public accommodations law, we have the federal law,” he tells the Georgia Voice. “I think that would be something we could address that might do that. That would be a high hurdle to get over in one session but we could see.”

Rep. Karla Drenner (D-Avondale Estates) knows a thing or two—or three—about trying to pass a statewide nondiscrimination bill. She tried and failed to pass her Fair Employment Practices Act (FEPA) for the third time in this year’s legislative session.

Drenner’s bill would have prohibited discrimination against state employees on the basis of sexual orientation or gender identity. This year’s bill had the strongest chance yet of passing, with 77 co-sponsors, including 19 Republicans.

She doesn’t buy the talk about an all-encompassing statewide nondiscrimination bill.

Willard reveals that FEPA, of which he was a co-sponsor, nearly had an alternative route through the House.

“We considered tying that provision onto the religious freedom bill,” he says. “It was only a possibility if it got the chance for the bill to move out of the House committee to the Rules Committee. But we felt it didn’t have support to get through.”

Beskin, who placed a big target on her back by voting to pass that nondiscrimination amendment in McKoon’s religious freedom bill, stands by her vote.

And as far as a statewide nondiscrimination bill?

“I’m open to having the dialogue also but until there is a bill I can consider, I can’t give an opinion on a hypothetical bill,” she says, adding, “I don’t think it has to be a separate bill.”

For now, LGBT Georgians have to live with the protections currently on the books, and the case law that’s provided precedent for certain protections.

Vandy Beth Glenn’s lawsuit, Glenn v. Brumby, resulted in added protections for one of the “big three” areas—employment. Glenn was fired from her job with the General Assembly’s Office of Legislative Counsel in 2007 after informing her superiors she was transitioning from male to female. Lambda Legal filed a federal lawsuit on her behalf, which she won in federal district court and which was upheld on appeal by the Eleventh Circuit Court of Appeals.

Therefore the case protects all transgender employees in Georgia, whether in the private or public sector, confirms Greg Nevins, senior attorney with Lambda Legal. But can Glenn’s case be used to protect employees discriminated against due to their sexual orientation?

Nevins says sexual orientation is a different issue because Glenn’s case didn’t speak to that, but there is a provision in the decision that notes transgender people transgress gender stereotypes and it is illegal to discriminate against them because of that. There’s not much of a leap from that to sexual orientation, because other courts have ruled gays and lesbians by their preferences and attractions defy gender stereotypes.

All it will take is a legitimate case of a Georgia employee being discriminated against due to their sexual orientation for an attorney to take a shot at citing Glenn v. Brumby. The success of such a case would add additional employment protections to Georgia’s LGB community, where the legislative route has failed.

“We’ll have to wait and see for the case and I will be certainly looking for it,” Nevins says.

Meanwhile LGBT legislators and activists will continue to hammer away at making whatever progress can be made at the legislative level.

The community celebrated the defeat of a religious freedom bill for the second year in a row, but the outcome of the session looks decidedly bleaker after taking a peek beyond that bill. Every other bill proposed during the session that had any semblance of being pro-LGBT—be it employment protections, anti-bullying, hate crimes, HIV/AIDS—failed across the board.

“We play defense a lot and considering the current environment in which we find ourselves, our defensive wins are our wins,” Drenner says. “We introduce stuff and we seemingly are optimistic that it’s going to move forward but at the same time other people are introducing things that could really, really harm us. It shifts our focus from proactive, positive pieces of legislation that we’re trying to generate support for over to the, ‘Oh my God this happened.’”

So, can we call what happened during this year’s session “progress?”

“Certainly with FEPA it’s a marker of advancement when we have 79 co-sponsors, 19 Republicans. That’s really a phenomenal showing of strength. Do I wish we’d been able to get greater movement on that? Of course I do,” Graham says.

“However, I hope that people will put into perspective that while there are still many legislative sessions in progress, we were one of the few states that was able to prevent a RFRA from passing this year and yes, that did become the focus but it became the focus because frankly if we have a bad religious freedom bill and don’t have strong civil rights protections to balance it, it makes any other incremental progress tenuous at best.”

Drenner is worried about more of what she calls “creative negative” bills that would affect the LGBT community in the future, but holds out hope for some future understanding.

“What I hope is that eventually the people that still believe that we are Biblically immoral perhaps might change in their position somewhat over time when they see that Florida and California didn’t fall off into the ocean and when a same-sex couple came in and ate a piece of pizza in the restaurant that the restaurant didn’t burn down,” she says.

“They’ll see we’re your family, we’re your friends, we’re your neighbors and we don’t want anything different than you want and I hope that happens.”