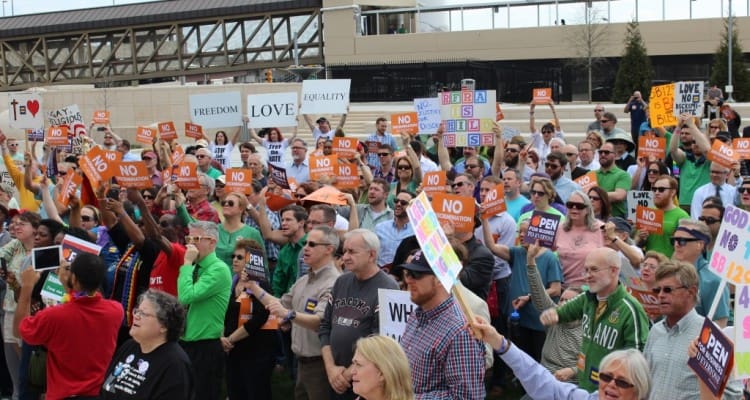 LGBT groups have set a date for a community rally against House Bill 757, the anti-LGBT so-called “religious freedom” bill that’s sparked a national backlash and put Georgia at the center of the discussion over faith and marriage equality.

LGBT rights coalition Georgia Unites Against Discrimination is hosting the April 5 rally at 12 p.m. in Liberty Plaza, right on Gov. Deal’s doorstep. The bill has been in Deal’s hands since a revised version of the bill, now dubbed the Free Exercise Protection Act, passed in the House and Senate on March 16. Since then he has been inundated with phone calls, emails, tweets and more from people on both sides of the issue, but has signaled he will not announce a decision until after this year’s legislative session ends on March 24. He has until May 3 to decide.

It’s an issue that the New York Times dubbed today as “one of the most consequential tests of political power on gay rights issues since the United States Supreme Court decision last summer that recognized a constitutional right to same-sex marriage.”

HB 757, the so-called “First Amendment Defense Act” has passed in the House & Senate. The next step is Governor Nathan Deal’s Desk. WE CANNOT ALLOW THIS BILL TO BECOME LAW IN GEORGIA!

Please join us in our efforts to tell Gov. Deal to VETO HB 757! On Tuesday, April 5 at 12:00PM, we will host a rally at Liberty Plaza (located at 206 Washington St. SW, Atlanta, GA). We need as many of our supporters to join us at the Capitol. Join Us As We Unite Against Discrimination!

Please plan to arrive at 11:30AM to pick up rally signs, buttons, and stickers. Join Us in Making a Big Statement: Veto HB 757! Discrimination is not a value of Georgia!

Freezing temperatures and snow flurries appeared to keep a larger crowd away from a Feb. 9 rally against such bills, so organizers are hoping for a rebound this time around with a little help from Mother Nature.