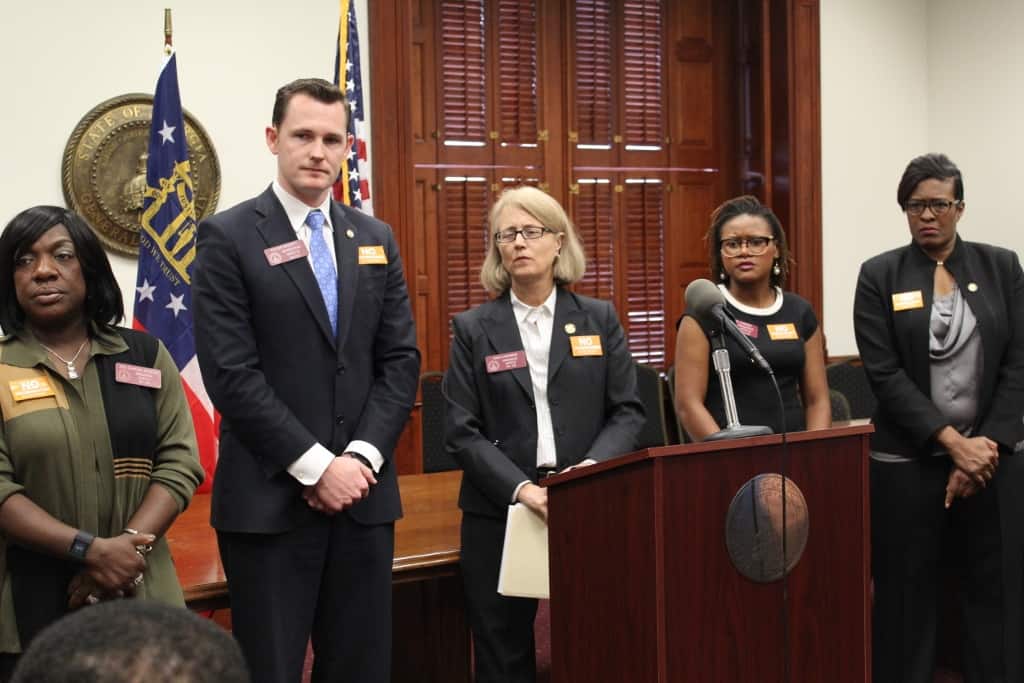 It’s hard to believe it’s been only five days since lawmakers unveiled a revised version of House Bill 757, which passed overwhelmingly in the House and Senate and landed on Gov. Nathan Deal’s desk for one of the most momentous decisions he will have made during his time in office.

LGBT groups and the business community lashed out, including the Georgia Chamber of Commerce and the Atlanta Chamber of Commerce. On Friday, the NFL said passage of the bill would jeopardize Atlanta’s chances of landing a coveted Super Bowl, and the Falcons, Braves and Hawks followed suit with public statements against the bill. And on Saturday, Human Rights Campaign president Chad Griffin called for Hollywood productions to pull out of Georgia should the bill become law.

Monday it was the three openly LGBT members of the legislature’s turn to stand together and voice their opposition, following comments made during floor debate last week.

“As a state we have consistently been on the wrong side of many issues regarding civil rights and equality,” said recently elected state Rep. Park Cannon (D-Atlanta), who identifies as queer. “Perhaps we are no longer a fortress of Jim Crow institutionalism, but we continue to regress by passing sweeping discriminatory measures like House Bill 757. I am sure that the state of Georgia is better than this.”

Also, the revised bill includes much of the language of the federal Religious Freedom Restoration Act of 1993, which requires government to prove a “compelling governmental interest” before it interferes with a person’s exercise of religion. There’s a provision added that says it cannot be used to allow “discrimination on any grounds prohibited by federal or state law” but there are no federal or state laws that expressly protect Georgia’s LGBT community against discrimination.

“From my perspective, when we allow discrimination in any form, we can no longer call ourselves free because some of us are not,” Rep. Drenner said. “Freedom is an all-or-nothing principle. There are no shades of liberty.”

The controversial path of HB 757

House Bill 757 was initially proposed by Rep. Kevin Tanner (R-Dawsonville) early in this year’s session and was dubbed the Pastor Protection Act. That version of the bill, which would keep religious officials from being required to perform same-sex wedding ceremonies, passed unanimously in the House in February with little controversy. However, due to over 10 other so-called “religious freedom” bills being proposed, a coalition of over 300 businesses called Georgia Prospers was formed in opposition to any discriminatory legislation.

But then, in a Feb. 16 Senate Rules Committee meeting, the language of Sen. Greg Kirk’s (R-Americus) First Amendment Defense Act was added to HB 757. Critics of Kirk’s bill said it would allow faith-based organizations to discriminate against the LGBT community and other groups. The Senate then passed that hybrid version of the bill on Feb. 19, and the national backlash began.

373K, a gay-owned Decatur-based telecom company, vowed to relocate. Local and national LGBT groups sent a letter to Gov. Deal and leadership in the state legislature calling on them not to pass the bill. The Southern Sociological Society, an academic group with 1,200 members and $650,000 invested in the state, vowed to move its annual conference out of Atlanta if the bill became law.

Marc Benioff, the billionaire CEO of tech company Salesforce, became a vocal opponent of the bill. Microsoft, Dell, Virgin and other major corporations jumped into the fight against the bill. LGBT groups delivered 75,000 emails and postcards to Gov. Deal’s office calling on him to denounce the bill.

Deal dropped a bombshell on March 3 with his comments to the AJC, saying he would reject any bill that “allows discrimination in our state in order to protect people of faith” and called on his fellow Republicans to “recognize that the world is changing around us.” Deal, a Southern Baptist, also made a biblical argument against discrimination.

The comments appeared to be a major blow to the bill’s chances to pass as is, but then early in the afternoon of March 16, word began to spread that a revised version of the bill would be introduced. What hit the House floor that evening made the LGBT community and supporters hit the roof. It contained the laundry list of issues listed in the above section, but still passed in the Republican-dominated House and Senate. The second backlash of the bill’s controversial life proceeded from there, with Georgia Prospers growing to include nearly 500 businesses.

And now it sits on Gov. Deal’s desk, waiting for his verdict—to veto or not to veto? He has until May 3 to decide, and has indicated he wouldn’t even look at it until April, after this year’s legislative session is over.