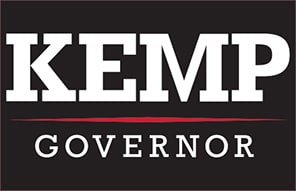 The female leaders criticized the letter Kemp sent to the Senate Judiciary Committee in support of the nomination of Kavanaugh.

“Judge Kavanaugh exhibits all the personal qualities that we must demand from our Supreme Court justices,” he wrote. “[H]e exudes civility and respect for others. He is a man of unquestionable integrity and values.”

The group believes that this praise was completely unwarranted and “could not be further from the truth.”

“Not only would Judge Kavanaugh pose a direct threat to Georgia women’s ability to make their own health decisions, he would also follow your lead in allowing companies to deny guaranteed coverage based on pre-existing conditions,” they wrote.

“Amid ‘what all is going on in Washington,’ as you put it,”  the letter continued, “your own failure to support Georgia women and your unwillingness to stop sexual assault cannot be ignored.”

This statement was in reference to complaints of sexual harassment by Massage Envy staff that Kemp left unpunished. The owner of Massage Envy, Patrick Greco, reportedly donated to Kemp’s campaign.

The letter ends with the message to Kemp: “We call on you to immediately retract your support of Judge Kavanaugh.