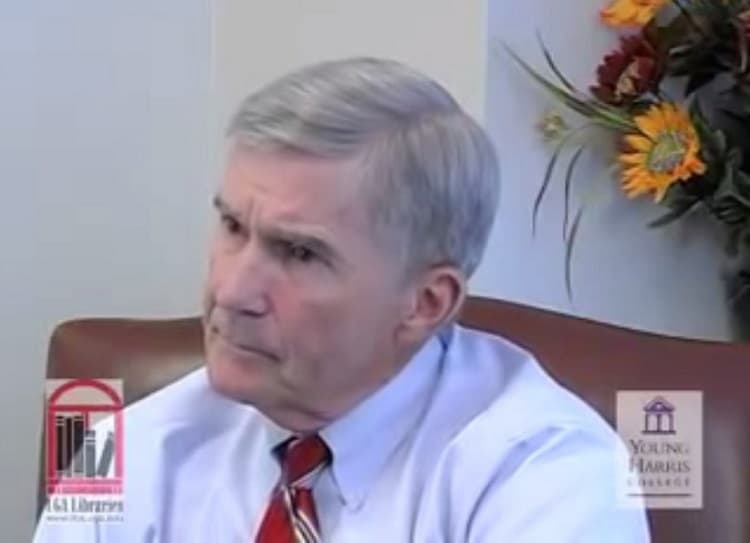 If you didn’t think things could get anymore dramatic in the fight over the so-called “religious freedom” bills, think again. Michael Bowers, the infamous Republican former Georgia attorney general who was at the center of two of the state’s biggest LGBT rights cases, has been hired by Georgia Equality to help fight passage of HB 218 and SB 129. The story was broken by Jim Galloway of the Atlanta Journal-Constitution.

In other news, dogs and mail carriers have reached a truce, Jennifer Aniston was spotted antiquing with Angelina Jolie, and Batman is going in on a summer home in Cape Cod with the Joker.

Bowers first drew the ire of the LGBT community in the 1980s, when Atlanta police arrested Michael Hardwick after finding him engaging in consensual sex with another man in his apartment. The police were serving a warrant on Hardwick for public drinking. The pair were arrested under Georgia’s anti-sodomy law but never tried.

Hardwick later sued Bowers in federal court to declare that the state’s sodomy law was invalid. Bowers refused and the case wound its way all the way up to the U.S. Supreme Court, who ruled in Bowers’ favor in 1986 and upheld the criminalization of gay sex. Anti-sodomy laws were later invalidated by the high court in 2003 in the landmark case Lawrence v. Texas.

Bowers found himself in hot water with the LGBT community again in 1991 when he rescinded a job offer to Robin Shahar for an assistant attorney general position after learning she was a lesbian. The then-attorney general claimed that Shahar’s sexual orientation would prevent her from enforcing the state’s sodomy law. Shahar sued Bowers but lost. Shahar now serves on Mayor Kasim Reed’s staff as his LGBT adviser.

The move by Georgia Equality brings to mind when Ted Olson joined the fight against Prop 8. Olson, the Republican Party’s go-to attorney in numerous high profile cases, is perhaps best known for representing George W. Bush in Bush v. Gore, which ultimately led to the end of the recount in the 2000 presidential election and put Bush in office. In 2009, Olson joined with David Boies, his opposing council in Bush v. Gore, in the federal lawsuit challenging Prop 8, California’s same-sex marriage ban. The challenge was successful and Prop 8 fell in 2013.

Bowers is reportedly planning to condemn the bills on Tuesday, but the AJC obtained advanced excerpts of what he plans to state.

First, I believe if enacted into law this legislation will be an excuse to practice invidious discrimination.

Second, if enacted, the proposed [measures] will permit everyone to become a law unto themselves in terms of deciding what laws they will or will not obey, based on whatever religious tenets they may profess or create at any given time. The potential intended and unintended consequences are alarming.

And then there’s this gem.

It is no exaggeration that the proposed [measures] could be used to justify putting hoods back on the Ku Klux Klan. For decades, Georgia’s Anti-Mask Act has prohibited wearing masks in public.

The law was enacted to prohibit the Ku Klux Klan from wearing hoods in public, and by extension, to discourage participation in its activities. While this statute contains exceptions for holidays, sporting events, theatrical performances, and gas masks, it does not contain a religious exercise exception – because many Klansmen used religion to justify participation in the Klan.

But the proposed [measures] would create a religious exception that was purposefully excluded. Anonymous participation in hate groups would undoubtedly rise….

The move caps a bad week for state Sen. Josh McKoon, whose SB 129 was tabled by the Senate Judiciary Committee, which McKoon chairs. The tabling happened after fellow Republican Sen. Bill Cowsert, vice chair of the committee, proposed an amendment to the bill that would exclude the possibility of discrimination.

State Rep. Sam Teasley is awaiting a first hearing with the House Judiciary Committee on his bill, HB 218.