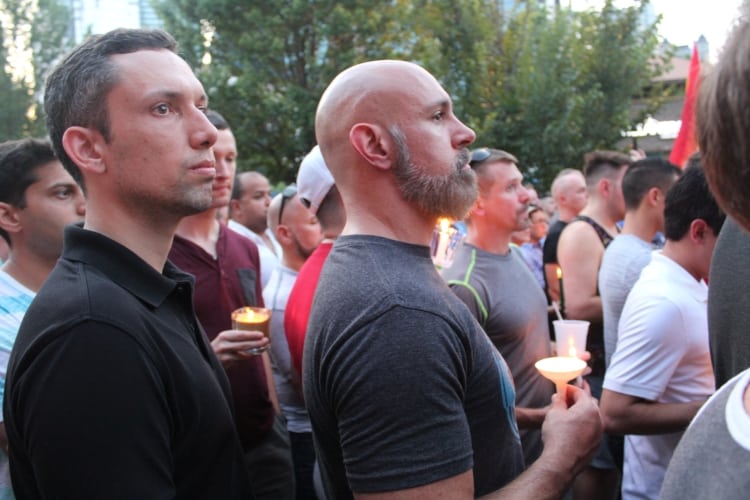 On Thursday, June 9, OneBlood, a blood bank that services Florida and parts of Georgia and South Carolina, issued a press release saying they had an “urgent need” for O negative blood, a type of blood that’s in constant demand because it can be given to any patient regardless of their blood type. In the early morning hours of Sunday, June 12, shots began to ring out at Orlando LGBT nightclub Pulse.

Over the next several hours, victims were transported to area hospitals, and OneBlood issued another call for blood, this one another “urgent need” for not only O negative, but O positive and AB plasma blood donors. 49 people died as a result of the shooting, with another 53 being injured. One of OneBlood’s own employees was among the dead.

It’s unclear if the number of deaths from the Pulse shooting would have been any different had there not been a blood shortage in the area, but one glaring irony emerged from the incident: more blood would have already been on hand and more donors would have shown up to give in the aftermath of the shooting if the Food and Drug Administration (FDA) didn’t ban gay and bisexual men from donating blood.

And now senators and members of Congress are calling on the FDA to change its policy, and activists around the country are employing unique tactics to get them to do the same.

In 1983, as the number of HIV infections and deaths from AIDS began to skyrocket, the FDA updated their guidelines so that any man who had had sex with men since 1977 was ineligible to donate blood. An HIV/AIDS test for blood was developed in 1985, but it wasn’t until December of last year that the FDA revised their guidelines, removed what in effect was a lifetime ban and changed it to where any man who had had sex with men in the previous 12 months was ineligible. But the fact still remained that straight people who have anonymous, unprotected sex all the time could still donate while HIV negative men in monogamous relationships are all banned for being gay.

The change came after a Department of Health and Human Services committee made recommendations to do so, but there was also heavy pressure from the public in particular. One initiative, the National Gay Blood Drive, was created in 2013 by a gay filmmaker in Los Angeles named Ryan James Yezak. Gay and bisexual men in cities across the country—including Atlanta—showed up to donate blood and got turned down, creating awareness about the ban. The following year, Yezak made it a two-pronged approach by having the gay and bisexual men take an eligible ally with them to give blood.

But the people behind the National Gay Blood Drive didn’t stop once the FDA changed it to a one-year deferral last December. The group’s spokesman, Jay Franzone, a 21-year-old senior at Lasell College in Newton, Massachusetts, decided to abstain from sex for a year to bring awareness to the policy.

“When our community is attacked, we want to help,” Franzone told Buzzfeed. “We want to be there. But we can’t because we’re gay. Discrimination is still alive and well in outdated federal policies.”

On June 20, 114 members of Congress and 24 members of the U.S. Senate sent letters to the FDA calling the current policy discriminatory against gay and bisexual men and urging them to base their guidelines on individual risk factors instead of targeting a specific set of people.

“During times of tragedy, the American people are quick to demonstrate their resiliency and mobilize in solidarity with victims and affected communities. We have witnessed that compassion as Floridians quickly lined up to donate blood for the wounded. Yet, some of those most touched by this tragedy-members of the LGBT community, who are especially eager to contribute to the response effort-are finding themselves turned away. Due to the FDA’s current MSM deferral policy, many healthy gay and bisexual men remain prohibited from donating needed blood,” the Senate letter read. “We are steadfastly committed to ending the FDA’s discriminatory policy that prohibits many healthy MSM from donating blood and moving to policies that secure our nation’s blood supply in a scientifically sound manner based on individual risk.”

The two letters were absent any signatures from senators or members of Congress from Georgia.

Meanwhile, the FDA will only say this: “The FDA will closely monitor the effects of the current changes over the next few years in order to help ensure that blood safety is maintained. At the same time, the FDA will continue to work in this area and review its donor deferral policies to ensure they reflect the most up-to-date scientific knowledge. This process must be data-driven, so the timeframe for future changes is not something that can be predicted.”