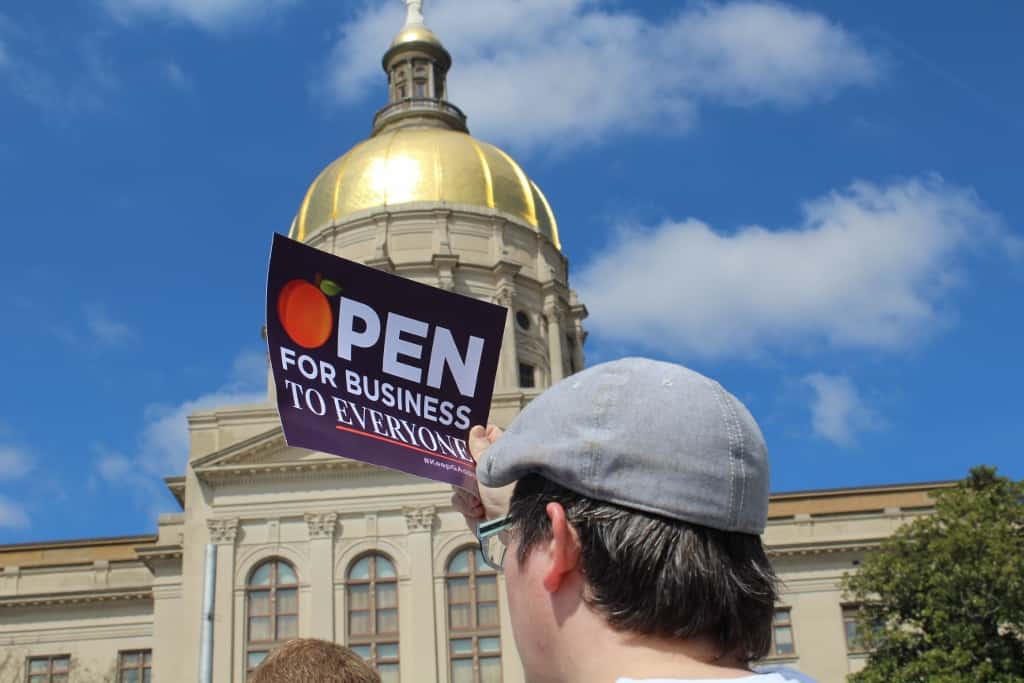 Millions of dollars in cold hard cash would be lost if the Georgia General Assembly moves forward like it appears to be doing and passes the so-called “religious freedom” bill that has already swiftly passed through the Senate and is well on its way to being passed in the House, according to the Georgia Association of Visitors Convention Bureaus.

As of today $15 million would be lost, according to the GVCB, which sent a letter to members of the House Judiciary Committee panel hearing on March 24. In the letter, the Georgia Association of Convention Visitors Bureaus calls the bill “unnecessary and divisive” and that already conventions are threatening to cancel coming to Georgia if SB 129, the “religious freedom” bill sponsored by state Sen. Josh McKoon (R-Columbus) is passed.

“As of today we know of at least $15 million in convention business that has stated that they will cancel their conventions should this bill pass,” states the letter to members of the House Judiciary Civil Committee. “If this bill passes, we expect the long term negative impact will be hundreds of millions in lost revenue …"

The full House Judiciary Committee is considering today bill that was gutted Wednesday of all attempts to ensure LGBT Georgians would not be discriminated against.

Major corporations such as Coca-Cola, Delta Air Lines, AT&T, Home Depot as well as the Atlanta and Georgia chamber of commerces were strong advocates pushing against last year's legislative attempt to pass a "religious freedom" bill, but have remained largely quiet this year, frustrating many LGBT activists.

In Indiana, a similar “religious freedom” bill was passed and signed into law today by Gov. Mike Pence. On Wednesday, leaders of the Christian Church (Disciples of Christ) urged the governor not to sign the bill into law and say they are planning to relocate its large church gathering in 2017 away from Indianapolis because of the law’s discriminatory language.

“Our perspective is that hate and bigotry wrapped in religious freedom is still hate and bigotry,” said Todd Adams, the associate general minister and vice president of the Indianapolis-based denomination, in a story by The Indianapolis Star. Adams said the church would instead seek a host city that is “hospitable and welcome to all of our attendees.”

The church gathering would bring 6,000 people to Indianapolis for its General Assembly with an economic impact of some $6 million.

And the Gen Con gamers convention is also planning to take its conference and its $50 million economic impact to another city because of the anti-LGBT bill.

Also, Salesforce, a major software corporation that has invested heavily in Indiana, is set to take its businesse elsewhere after the passage of the "religious freedom" bill there, taking more millions in revenue out of the state.

UPDATE: Atlanta's own LGBT-fave Dragon Con came out publicly in a statement denouncing the proposed "religious freedom" bill on March 26. The statement was released before the House Judiciary Committee eventually voted to table the bill after an amendment was added that would have ensured LGBT people would not be discriminated against. The statement from Dragon Con President Pat Henry states:

"Dragon Con is proud of its long history of accepting all fans, no matter who they are today or who they want to be during the convention. We are working through the Atlanta Convention and Visitors Bureau and the Georgia Hotel and Lodging Association, which are actively lobbying against this discriminatory bill, to make our opinion known to Georgia legislators. We have great faith that our state’s leaders and legislators will, eventually, do the right thing for all Georgians. Legislation that hurts one of us hurts us all. Should this bill become law, we will seek written assurances from all of our business partners that they will not participate in any discriminatory behavior on the basis of race, color, religion, sexual orientation, gender identity or any other point of identification. We have no intention now or in the future of supporting a business partner that discriminates.”

The Georgia Association of Convention Visitors Bureaus letter sent to the members of the House Judiciary Committee: