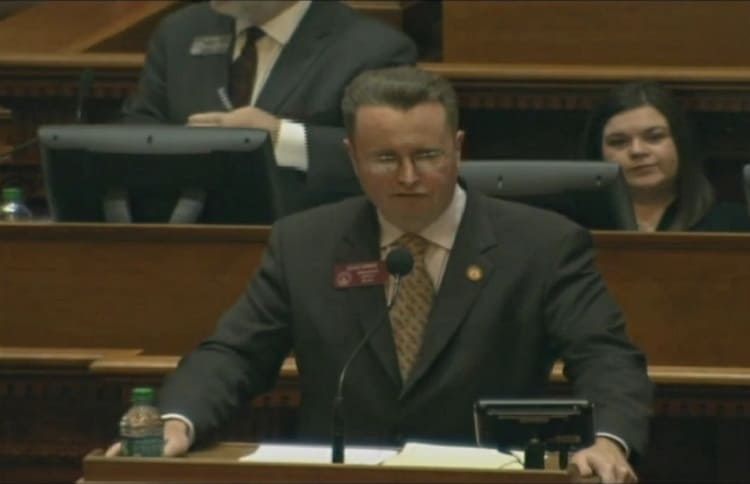 A bill that would keep religious officials from being required to perform same-sex marriage ceremonies passed 161-0 in the House Thursday afternoon. It was the first of eight religious exemption bills under consideration in the legislature to reach the chamber for a vote, and a move that widens the national spotlight on Georgia’s legislative reaction to last summer’s U.S. Supreme Court ruling on same-sex marriage.

While there is nothing in state or federal law that would require religious officials to perform such ceremonies, Tanner has said he’s heard concerns from those who fear the opposite, and that HB 757 is meant to alleviate that “unease.” On the House floor Thursday, Tanner spoke of a member of his constituency who called him sobbing after the U.S. Supreme Court ruling, apparently worried her husband (a pastor) would go to jail for refusing to marry same-sex couples.

“This is not something that churches should have to worry about in the United States and our state,” Rep. Tanner said.

Several lawmakers took the opportunity to speak out in favor of the bill on the House floor Thursday, reciting Bible passages and making it seem more like a church service than a legislative day. Rep. Paul Battles (R-Cartersville) called it “a sad day that we have come to even consider this” and said the bill did not go far enough.

“The religious community is being persecuted,” Battles said. “It may be the last time that the people of God can stand up and say enough is enough.”

Speaker Ralston made a rare appearance in the well to speak out in favor of the bill, making an ironic statement following the series of Bible passages that came before him.

“This bill provides fundamental protections for our clergy and reaffirms the separation of church and state in the law of Georgia in a time of great change and a shift in the cultural, legal and political landscape,” Ralston said.

Meanwhile, Sen. Josh McKoon posted an eyebrow-raising tweet while Ralston was speaking. McKoon has faced frustration over his efforts to get Senate Bill 129, a state version of the federal Religious Freedom Restoration Act, passed.

HB 757 is a Politician Protection Act. Do not be deceived. #gapol #rfra #gagop

While many consider the bill the least controversial of the religious exemption bills, some legal scholars worried that Section 3 of the bill was too broad and could allow religious organizations to discriminate against the LGBT community.

First Amendment Defense Act up next in committee

Thursday’s vote marked Day 21 and the halfway point in the session. Crossover Day (the day when a bill must “cross over” from one chamber to the other in order to pass this session) is scheduled for Feb. 29, the day before the state’s March 1 presidential primary.

Senate Bill 284, Sen. Greg Kirk’s (R-Americus) First Amendment Defense Act, is scheduled for a hearing in the Senate Rules Committee following adjournment of Thursday’s session. It’s a hearing that has been pushed back several times while Kirk irons out the language of the bill, which is considered the most anti-gay of all the religious exemption bills and would allow religious organizations and businesses to refuse to do business with same-sex couples, a move that would override non-discrimination ordinances in 60 municipalities across the state.

Georgia Unites Against Discrimination has had its sights set on the bill, calling on the LGBT community and allies to contact their representatives to voice their opposition.

UPDATE 1:45 p.m.: The hearing for the First Amendment Defense Act has been postponed until next Tuesday, Feb. 16.