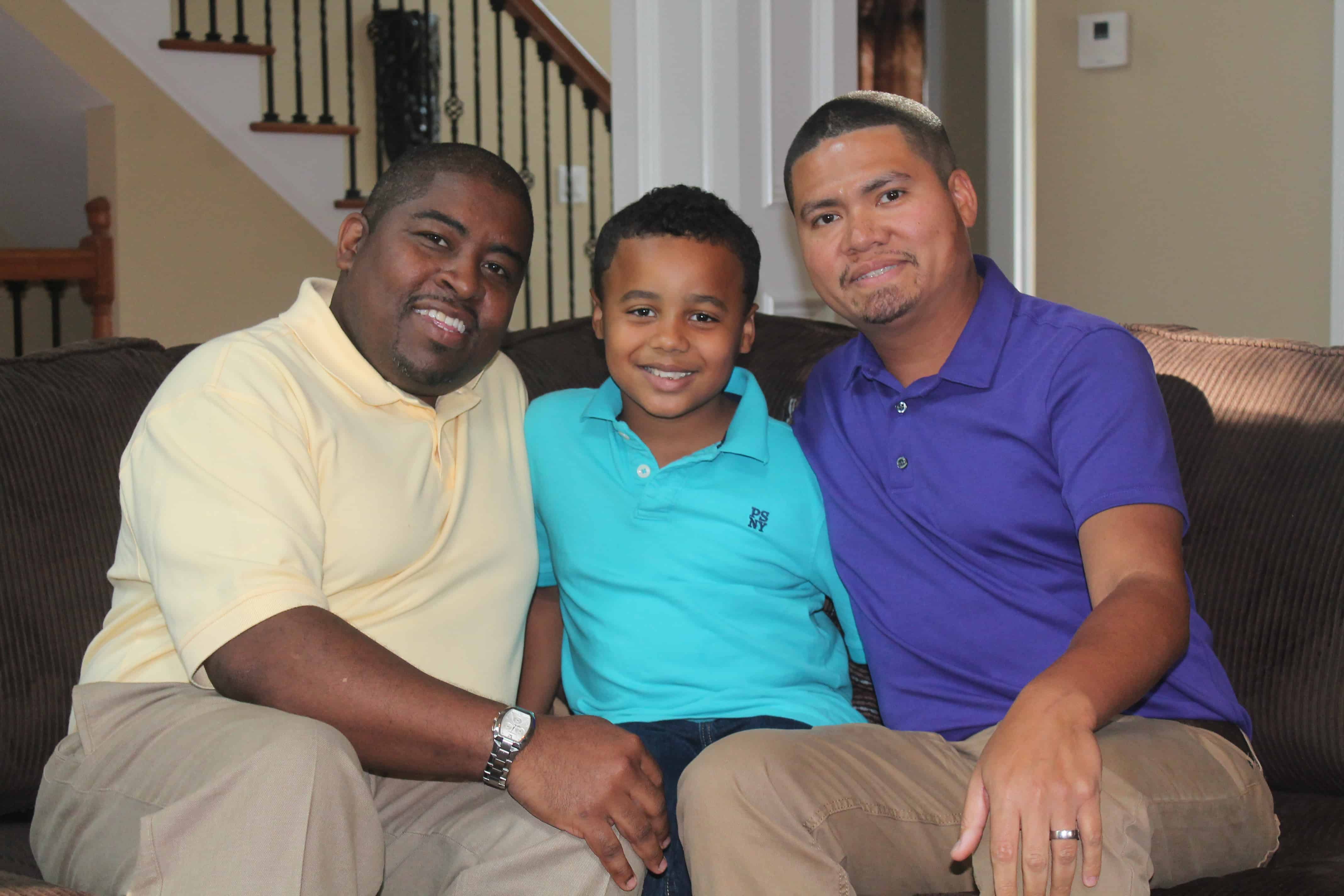 Inniss is not a common name. In Georgia, however, it is a name headed for the history books.

Christopher Inniss, 40, and his partner, Shelton Stroman, 42, are fighting alongside seven other plaintiffs to finally bring marriage equality to the Peach State.

Inniss got the call about being named the lead plaintiff the day before the April 22 press conference announcing the filing of the suit by Lambda Legal.

“The lead lawyer called and asked if I minded my name being on it. I was fine with it, but I was surprised,” Inniss tells the GA Voice as he sits alongside Stroman in the living room of their Snellville home. Their 10-year-old son Jonathan plays in his room upstairs.

“It is weird because my name is already not a common name, so when I see it, it’s very strange,” Inniss continues. “It kind of causes anxiety, like we have to win now because I don’t want my name to be down in law books if we lose. But I’m pretty confident. We’ve got great lawyers.”

On Oct. 6, the Supreme Court declined to take up the issue of marriage equality for the current term, meaning that if and when same-sex marriage comes to Georgia, in all likelihood it will happen due not to a nationwide decision but to the current federal class action lawsuit, known as Inniss v. Aderhold.

The two met through a mutual friend who saw a possible connection between the two after noticing their homebody tendencies.

“He was saying I was just like his friend Chris, and he said, ‘He’s boring too, y’all should meet each other,'” Stroman says.

So Inniss and Stroman went out to a movie and then dinner together, where they talked to each other for hours and shut down the restaurant. Inniss says the first thing he noticed about Stroman was his smile.

However, Stroman had a slightly different impression.

“When I first met him, I was like, ‘Oh, my God. Nerd!'” Stroman says with a laugh. “But then we talked and I was blown away by all the things he talked about. His personality and the conversation was the first thing that made me more attracted to him.”

The two even talked about marriage and children on that first date, and they had aspirations in common. They went out again the very next night and things took off from there. Three months later they moved in together, and 13 years later, they are raising a family—and suing the state for the right to legally marry in Georgia.

Inniss and Stroman started seriously talking about adopting about a year after they moved in together, and unfortunately, going through Georgia’s foster care system was a bust. They went through eight weeks of classes to become certified, then attempted to adopt several times but kept getting rejected at every attempt.

“Almost every time, the reason was that these kids needed a mom and dad,” Inniss says.

After a year of frustration, they found an adoption agency called Abby’s One True Gift that matches birth mothers with parents. They applied, and within a week there was a match with a birth mother who liked them. Within months, they got the call that their son was being born. They jumped in the car and made the trip to a hospital in Louisiana and, after jumping through a series of hoops, met Jonathan.

The couple says he’s a happy-go-lucky boy who’s big into sports and video games and is a straight A student.

“He loves for us to love him,” Inniss says.

But Inniss and Stroman still experience hardship due to their sexual orientation. A case in point being Stroman’s attempt to legally change his name to Inniss. A Cherokee County judge (whose name neither recalls) berated Stroman when he made the request.

“He said, ‘In this courtroom, I am God and you will not make a mockery of this judicial system by wanting to change your name to another man’s name,’” Stroman says.

It’s just one of many reasons the couple needed the protections and rights that a legal marriage entails, but they never had designs on having such a high profile role in making it happen.

“Our thoughts were that we would ride on the coattails of someone else or some other plaintiff,” Inniss says. “We never really thought it would be us.”

But friends of the couple mentioned that they should contact Lambda Legal to look into what kinds of couples the organization was looking for to file suit in Georgia. They were a great fit for the case, but were concerned about the safety of their family and how the experience would affect Jonathan. But an unforgettable conversation with their son allayed their fears.

“When we started talking to him and I asked him about marriage, he quoted Dr. Seuss, saying, ‘A person’s a person no matter how small.’ I was blown away,” Stroman says. “He always talked about his friends’ moms and dads and how they talked about marriage and he wanted the same thing for us. I understood then that he knew what we were going through and wanted us to be married.”

‘WE DO EVERYTHING WE DO AS A FAMILY’

Although they had no experience whatsoever with something of this magnitude, Inniss and Stroman’s resolve helped calm any nerves in the days leading up to the announcement of the suit.

“We never sheltered ourselves or our child from anything, and we do everything we do as a family,” Stroman says. “We’ve always had people looking at us differently. We were just happy that now something would be done about our rights.”

With a wall of cameras facing them courtesy of the local and national media at Lambda Legal’s Midtown offices to cover the announcement on April 22, the two stepped up to the microphones together and fought back tears as they told their story, including Jonathan’s Dr. Seuss quote.

Shortly after they left the press conference, the avalanche of voicemails, text messages and Facebook messages rolled in. By the next morning, both Stroman, who works at the couple’s pet resort full time, and Inniss, who is a veterinarian at Banfield, had customers and clients praising them. But the response hasn’t been all good; they’ve received many homophobic text messages and emails and a letter from an “ex-gay” organization.

“It was kind of humorous to us. We’re not replying or entertaining any of that nonsense. Some of it can be hurtful but we try not to read it,” Inniss says.

They’ve kept the letter and plan on including it and any other negative feedback in a journal that documents the experiences they have throughout this entire journey, both good and bad.

Inniss and Stroman have bonded with the fellow plaintiffs who stand alongside them in this fight to strike down Georgia’s same-sex marriage ban. They consider the group as family, and try to get together as schedules allow. But they don’t talk about what you think they would talk about.

And if the plaintiffs prevail in court, Stroman will get that name change to Inniss, forever linking the family to its namesake case.

The plaintiffs and the attorneys representing them were among those selected as grand marshals for this year’s Atlanta Pride parade on Sunday, Oct. 12. Marching alongside Inniss and Stroman will be:

• Rayshawn Chandler, 29, and Avery Chandler, 30. The two legally married in Connecticut on June 26, 2013, and are planning to have children, according to the suit.

• Michael Bishop, 50, and Shane Thomas, 44, have been together for eight years. They have two young children. They filed for a marriage license in Fulton County Probate Court on April 10 and were denied.

• Jennifer Sisson, 34, whose wife, Pamela Drenner, 49, died after a long battle with ovarian cancer on March 1. Due to Georgia law, she was forced to choose “never married” as Drenner’s marital status on the death certificate, causing her tremendous pain, according to the lawsuit.

• Beth Wurz, 41, and Krista Wurz, 39, were married in October 2010 in New Hampshire, and have seven children, including five placed with them through foster care. Krista and some of the children are denied health coverage through Beth’s job because of Georgia’s same-sex marriage ban.