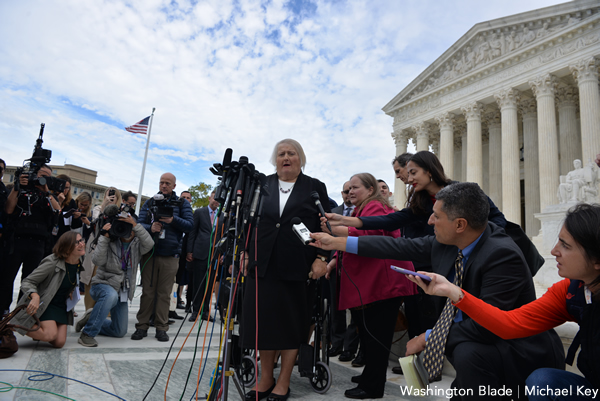 Aimee Stephens, the funeral home director fired for being transgender and the center of a Supreme Court case that will determine whether anti-trans discrimination is prohibited nationwide, has died at age 59, the American Civil Liberties Union announced Tuesday.

Stephens died at her home in metro Detroit with her wife, Donna Stephens, at her side as a result of kidney failure and related complications, an ACLU spokesperson said.

An unexpected leader in the LGBTQ movement, Stephens was terminated from the job in 2013 at Harris Funeral Homes for being transgender after she announced she’d transition. Her case led to litigation that is currently pending before the Supreme Court and could see a decision as soon as this week.

Chase Strangio, deputy director for Trans Justice with the ACLU’s LGBT & HIV Project, said in a statement Stephens “did not set out to be a hero and a trailblazer, but she is one.”

“Being a part of Aimee’s team at the Supreme Court has been one of the proudest moments of my life because of the amazing person behind the case,” Strangio said. “As a member of her legal team, I am deeply sad for this loss. As a transgender person and an advocate, I am filled with both grief and rage that we have lost an elder far too soon.”

Stephen’s case will determine whether anti-trans discrimination is a form of sex discrimination, therefore illegal in the workplace under Title VII of the Civil Rights Act of 1964.

The litigation, Harris Funeral Homes v. EEOC, was consolidated before the Supreme Court with cases of gay workers alleging discrimination — Zarda v. Altitude Express and Bostock v. Clayton County. The three cases will determine whether discrimination in the workplace against the entire LGBTQ community is illegal.

Stephens attended oral arguments at the Supreme Court after addressing the crowd on the steps before in the building and was seen ushered around in a wheelchair by transgender actor and activist Laverne Cox.

In October 2019, Stephens told the Washington Blade she wasn’t sure she’d attend because of health concerns, but said the journey has “been an eye-opening experience.”

“You always wonder what goes on, what happens, what makes (things) tick, how do things get done,” she said. “One of the things I’ve noticed is the wheels of justice grind very slowly.”

A spokesperson for the ACLU said standing still exists in the Stephens’ case despite her passing. One of the other cases before the Supreme Court consolidated with Stephens’ case, Zarda v. Altitude Express, involves a skydiver who alleges he was terminated for being gay and died in 2014.