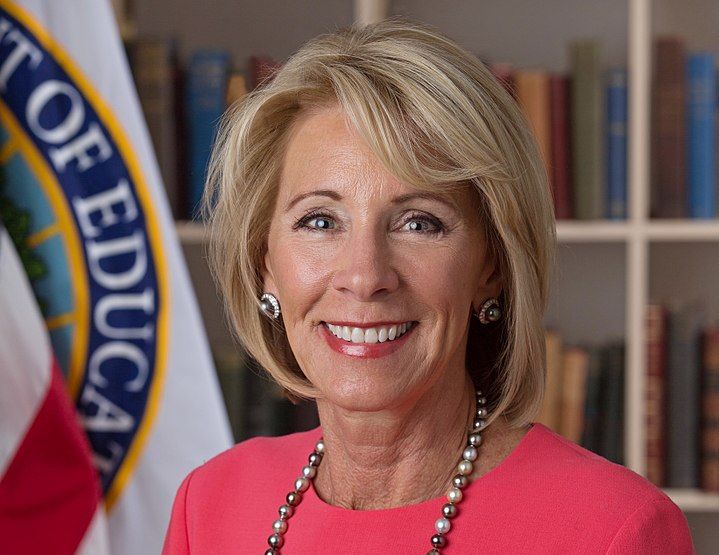 The Department of Education Secretary, Betsy DeVos, has proposed changes to Title IX, the law preventing sex discrimination in schools, hoping to rescind Obama-era regulations on sexual misconduct in education, said a report by the New York Times.

These new rules narrow the definition of sexual harassment, and schools will only be held responsible for formal complaints and actions that take place on campus.

Critics have claimed that limiting the responsibility of the school is “absurd.”

Brennan Heil, a senior at the University of Southern California, said, “Most students live off campus. How far does my rapist have to drag me before I stop mattering to my school?”

Heil said that she went to her school’s student health center for STD tests after being raped in her hometown. She said that Dr. Georgia Tyndall, who has been accused of sexually abusing women, aggressively questioned her, pressing for details about how often she had oral sex and whether it was with men or women.

While DeVos’ rules will lessen the liability of the campus administration, they will also give more rights to students accused of rape, assault, or harassment.

They would also continue DeVos’ year-old policy of using mediation between the accused and accuser to reach informal resolutions.

Students who oppose these changes fear that they would make it impossible for victims to feel comfortable filing complaints, leaving them more fearful and isolated.

“I think it is a setback for those of us who seek justice for women,” said Dana Loewey, who was a graduate student at University of Southern California in the 90s. “It’s hard enough for people who are victims of harassment or assault to come forward and I fear this will make it even more difficult.”

Loewey said that she went to female physician after Dr. Tyndall made her extremely uncomfortable, but nothing came of it.

There is also support for DeVos’ changes.

“I think the department is trying to balance the interests of all parties,” she said. “They’re also trying to preserve basic rights for the accused, which includes the presumption of innocence. I don’t understand why anyone would object to that.”

Garrett added that she doubted universities would actually allow someone with a sexual assault allegation to be cross-examined by the person they accused, but that schools might allow a lawyer or administrator to question the person.

However, people like Morgan McCaul, a sophomore at University of Michigan and a survivor of abuse by Dr. Lawrence G. Nassar, disagree.

“I think it’s an attack on students’ rights disguised as due process,” she said.

She tweeted to DeVos: “Is ruining lives your version of a back-to-school welcome?”

If put into effect, these changes will affect colleges, universities, and K-12 schools.