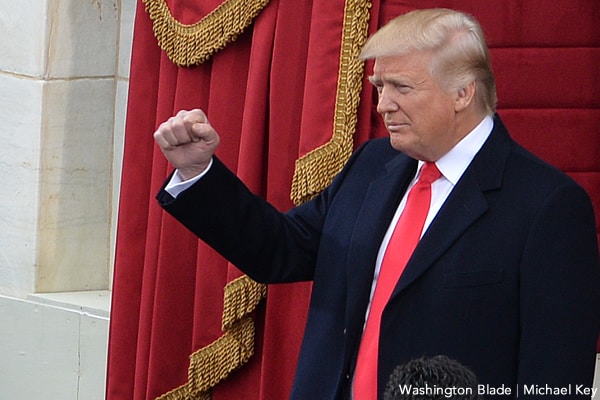 With the 100-day mark of President Trump’s time in the White House fast approaching, LGBT rights supporters are giving him failing grades as the nation evaluates him at the benchmark.

Since he took the oath of office on Jan. 20, the White House has asserted Trump is “respectful and supportive of LGBTQ rights,” but at the same time he has taken anti-LGBT actions — such as undoing guidance protecting transgender students — and filled his administration with opponents of LGBT rights.

The Washington Blade solicited evaluations and grade assessments from six LGBT advocacy organizations on Trump’s performance in anticipation of his 100th day in office on April 29. Each of the organizations gave the president a failing grade with the exception of Log Cabin Republicans, which gave him an “A-” grade.

Rea Carey, executive director of the National LGBTQ Task Force, said she gave Trump a failing grade for missteps ranging from anti-LGBT appointments, immigration enforcement that has “targeted undocumented immigrants with a vengeance” and a budget proposal that increases defense funding at the expense of programs for the middle class.

“Since taking office, Donald Trump has pushed an agenda that is designed to destroy lives and roll back progress,” Carey said. “Everything he has done is detrimental to marginalized communities. His executive orders and actions dehumanize and devalue entire communities of people — including trans children, people of color and women.”

To the surprise of many, the start of the administration saw limited support for LGBT rights. The White House within days of the new administration issued a statement declaring Trump is “respectful and supportive of LGBTQ rights” and would keep in place an executive order signed by President Obama in 2014 that barred federal contractors from engaging in anti-LGBT workplace discrimination.

The Trump administration also defied the wishes of anti-LGBT advocates seeking to purge the State Department of LGBT rights supporters by keeping in place Randy Berry in his role as special envoy for global international LGBT rights.

Gregory Angelo, president of Log Cabin Republicans, cited those commitments — in particular Trump’s pledge to keep the federal contractor order, which was made after a request from Log Cabin to leave the directive intact — in his explanation for why Trump deserves an “A-” for his first 100 days in office.

“Trump’s first 100 days in office have been something of a mixed bag in regard to LGBT issues, but that was to be expected considering his concurrent outreach to evangelicals and to LGBT voters during his campaign,” Angelo said. “There has been a lot of hand-wringing about a number of ‘non-troversies’ over the past three months — fake news stories about the White House ‘erasing’ gay people from the Census and the White House website, which were nothing more than fundraising ploys to rile up dejected LGBT liberals still reeling from Hillary Clinton’s loss.”

But other indications bely Trump’s stated support for LGBT people. Despite the White House pledge to keep the Obama-era executive order intact, concerns persist Trump will sign an new directive that would undermine the order and otherwise enable anti-LGBT discrimination in the name of “religious freedom.”

Media reports have said Ivanka Trump and Jared Kushner convinced Trump not to sign the order, but White House Press Secretary Sean Spicer has said the administration would “have something” on it. Just this week, USA Today reported a group of 51 House Republicans have sent a letter to Trump calling on him to sign the “religious freedom” executive order.

The same holds true for people with HIV/AIDS. Although the Trump administration’s proposed budget identified HIV funding as a priority and maintains funding for the Ryan White HIV/AIDS Program, it seeks to cut funding by nearly 20 percent for the National Institutes of Health, which conducts HIV research, and PEPFAR, a Bush-era program that seeks to combat the global HIV epidemic.

Chad Griffin, president of the Human Rights Campaign, explained his failing grade for Trump by saying any promises the White House has made in support of LGBT people are undermined by Trump’s actions in his first 100 days.

“Since the moment he walked into the Oval Office, Donald Trump has attacked our progress and undermined the rights of countless Americans, including LGBTQ people,” Griffin said. “From his anti-LGBTQ appointees and nominees, to rescinding protections for transgender students, to his Muslim ban, to his draconian deportation orders, to now considering a taxpayer-funded license to discriminate, Donald Trump has broken his promise to be a president for all Americans.”

In terms of anti-LGBT actions, the most concrete actions are ones undermining trans rights in particular. Most prominently, that came in form of U.S. Attorney General Jeff Sessions and Education Secretary Betsy DeVos revoking Obama-era guidance instructing schools discrimination against trans kids, such as denying them access to the restroom consistent with their gender identity.

Under Sessions, the Justice Department also withdrew litigation against North Carolina’s anti-LGBT law after it was replaced despite assertions from civil rights groups the new law is discriminatory. The department also missed a deadline to appeal a court injunction barring enforcement of an Obama-era regulation assuring trans people have access to health care, including gender reassignment surgery.

Mara Keisling, executive director of the National Center for Transgender Equality, was insistent the Trump administration is actively seeking to undermine civil rights in explaining the failing grade she gave to the new president.

“The Trump administration set about trying to roll back civil rights for several communities from day one, and the LGBT community was no exception,” Keisling said. “From packing agencies with extremist appointees, to attacking transgender students, to undermining health care for transgender people, this administration has already completely undercut any campaign promises of support for LGBT equality.”

On international LGBT rights, the Trump administration has already seen a human rights crisis after the emergence of reports of arrests and torture of gay and bisexual men in Russia’s semi-autonomous Republic of Chechnya. More than 100 men have been tortured and at least three killed in what media reports are calling “concentration camps.”

After some prodding, U.S. Ambassador to the U.N. Nikki Haley has said the U.S. government is “disturbed by reports of kidnapping, torture and murder of people in Chechnya,” although Trump himself has remained silent.

Jessica Stern, executive director of OutRight Action International, gave Trump a failing grade on international work even though Haley spoke out against anti-gay abuses in Chechnya.

“The policies that we are seeing coming out of the Trump administration are scary and dangerous,” Stern said. “Expanding the global gag rule, putting forth a Muslim ban, targeting Mexicans, all of these policies are contributing to an environment of marginalization and fear. These policies doubly discriminate against LGBTIQ people who belong to these communities and experience multiple forms of oppression.”
Stern also accused Trump of “undermining the international system” by seeking to eliminate funds for the United Nations and appointing to a U.S. delegation to the U.N. women’s conference a pair of anti-LGBT activists.

“What we need now are for progressive leaders in other countries to fill this vacuum and push forward to continue moving the needle forward on human rights,” Stern said.

In contrast, Trump has yet to make a single openly LGBT appointment. Media reports have indicated Trump intends to appoint Fox News commentator and foreign policy expert Ric Grenell, who’s gay, as U.S. ambassador to NATO, but that nomination has yet to occur.

Meanwhile, Trump appointments include Roger Severino as assistant secretary of civil rights at the Department of Health & Human Services, which essentially places an anti-transgender activist in charge of defending trans health. LGBT advocates are also seeking to derail the confirmation of Trump’s choice of Army secretary, Mark Green, who has taken anti-LGBT positions during his career as a state legislator and said being trans is a “disease.”

Aisha Moodie-Mills, CEO of the Gay and Lesbian Victory Fund, gave Trump a failing grade for “surrounding himself with appointees who demonize or oppose the rights of our community” instead of making LGBT appointments.

“Personnel is policy, and the extremist worldview of his administration is driving agency and administration policy on LGBTQ rights,” Moodie-Mills said. “We saw that when the transgender school guidance was rescinded in February, and we are seeing it now with his insufficient response to widespread reports that gay men in Chechnya are being systematically tortured and murdered. We also see it with his administration’s attacks on LGBTQ immigrants, women, people of color and Muslims.”

Moodie-Mills called on LGBT rights supporters “to be clear-eyed and relentless because these 100 days were just the beginning,” urging LGBT people to run for public office.

“Ivanka Trump is not going to save us,” Moodie-Mills said. “We need LGBTQ leaders to run for office and represent us in the halls of power — they are our best defense against anti-equality efforts moving forward.”

The White House didn’t respond to the Blade’s request comment on ways the Trump administration has acted to protect or advance LGBT rights during Trump’s first 100 days in office. 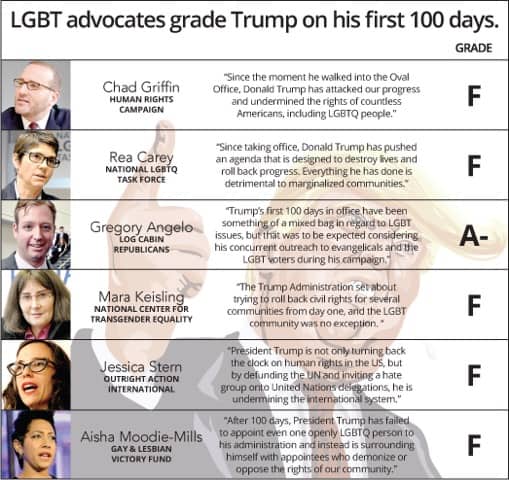