Few things are as sweet as watching bullies get their comeuppance. Whether on a playground or in a political campaign, there is such a savory amusement that comes when the once mighty and feared are revealed as feeble and beatable.

The current class of Republican presidential candidates has been filled with anti-gay bullies, from U.S. Rep. Michele Bachmann (R-Minn.) using spiritual noogies and “reparative therapy” to try to force gay people to change their sexual orientation, to former Speaker of the House Newt Gingrich (R-Ga.) threatening imprisonment for federal judges who failed to justify pro-LGBT rulings to his satisfaction.

There was Texas Gov. Rick Perry’s peculiar advertisement in which he yearned for the grand ol’ days when kids could pray in the classroom and queers could be kicked out the military, and Georgia businessman Herman Cain playing a game of “Quit Hitting Yourself” by insisting that there was no science to disprove his belief that being gay is a choice, then refusing to look at the abundance of research that suggests sexual orientation isn’t optional.

All of these candidates spent time as the stud of the GOP field (something tells us Bachmann wouldn’t mind being identified as a stud), and all endured humiliating reality checks as the public learned more about their political positions and personal eccentricities.

Cain had already “suspended” his campaign before Tuesday’s Iowa Caucus also knocked out Bachmann, but the battle for the GOP presidential nomination — and then the race to the Nov. 6 presidential election — will dominate national headlines for 2012.

Before this republic of dunces is winnowed to a single challenger to President Barack Obama, here’s a look at where the GOP candidates stand on LGBT issues, and the ridiculing language some have used to torment LGBT Americans. 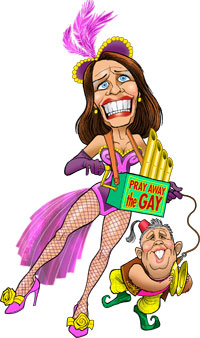 As a rising star of the Republican fringe, Bachmann expressed a strikingly intimate opposition to homosexuality. In a 2004 speech, Bachmann, then a state senator in Minnesota, delved into a gay person’s emotional psyche as she detailed the “very sad life” lived by those who are plagued by “sexual dysfunction and sexual identity disorders.”

“It’s part of Satan, I think, to say that this is ‘gay’ — it’s anything but ‘gay,’” Bachmann said at an education conference hosted by a now-defunct right wing group known as EdWatch.

From 2003-2005, state Sen. Bachmann led a series of failed efforts to amend Minnesota’s constitution to ban same-sex marriage, and she was able to parlay that role into a congressional seat in 2006. However, the early momentum of her presidential bid ground to a halt once her outlandish perspective on homosexuality and a variety of other issues began receiving more scrutiny.

Several former patients of the counseling clinic owned by Bachmann and her husband, Marcus, alleged that the facility tried to use Christian theology to cure them of their homosexuality. Although the Bachmanns denied trying to “pray the gay away,” the controversy rightly turned Michele Bachmann (and her husband’s alleged heterosexuality) into a punchline.

It’s better for LGBT folks to have her out of the running, but as a political joke, we’ll miss her. 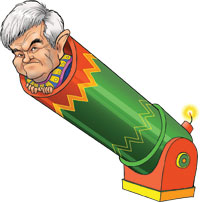 In December, the former Speaker of the House from Georgia became the fifth GOP candidate to sign a pledge to advocate a constitutional ban on same-sex marriage if elected president (Bachmann, Perry, former Massachusetts Gov. Mitt Romney and former U.S. Sen. Rick Santorum also signed the anti-gay pledge created by the National Organization for Marriage).

Although Speaker Gingrich helped marshal the Defense of Marriage Act through Congress, gay men and lesbians ought not worry since honoring pledges related to marriage is not Gingrich’s forte.

As if being lectured about the “sanctity of marriage” by a double divorcee weren’t insulting enough, Gingrich has revved up his push for severe penalties for  judges who interpret the U.S. Constitution differently than himself.

“The Constitution of the United States has absolutely nothing to say about a constitutional right to same sex marriage,” Gingrich wrote in a “white paper” on “judicial supremacy.”

“Should the Supreme Court fail to heed the disastrous lessons of its own history and attempt to impose its will on the marriage debate in this country, it will bear the burden of igniting a constitutional crisis of the first order,” wrote Gingrich, who later elaborated on how U.S. Marshals could be dispatched to arrest judges who didn’t explain their decisions to Congress.

Gingrich is fond of cloaking himself in intellectualism, but neither his “white papers” nor his pretentious turns of phrase make him sound any less buffoonish. 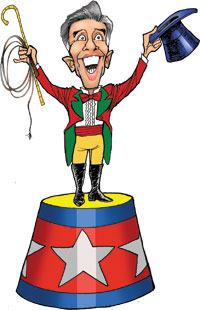 Arguably the most LGBT-friendly candidate in the Republican field, Huntsman told CNN that he believes “this country has arrived at a point in time where we can show a little more equality and respect.” The operative words, however, are “a little more.”

Huntsman supports civil unions for gay and lesbian couples and, as governor of Utah, signed a law creating such unions for the state in 2009. He also refused to endorse the anti-gay marriage pledge taken by most of his primary opponents.

Although favoring “reciprocal benefits” for same-sex couples, Huntsman is solidly opposed to same-sex marriage. In 2004, he supported Utah’s constitutional amendment defining marriage as between one man and one woman, and refers to the Defense of Marriage Act as a “safeguard” against same-sex marriage.

“I’m in favor of traditional marriage, I don’t think you can redefine it without getting in trouble, but I think along with that we can have civil unions,” Huntsman said, essentially adopting the same position as President Obama. 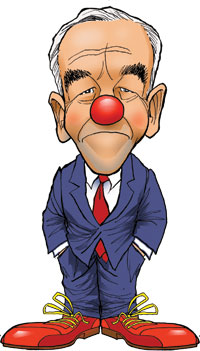 On the eve of the Jan. 3 Iowa caucuses, the National Organization for Marriage targeted Paul with a television ad criticizing the Texas congressman for refusing to sign the group’s anti-gay marriage pledge. Based on the adage about the enemy of my enemy being my friend, NOM’s opposition to Paul should make gay voters consider whether the staunch libertarian is a friend of our movement.

Paul has a history of being on the progressive side of gay rights debates: He voted against the Federal Marriage Amendment in 2004 and supported the repeal of “Don’t Ask, Don’t Tell.” But he also has much longer history of making archaically offensive statements about a rainbow of minorities, and opposing non-discrimination laws and government funding for AIDS research and care.

In the last few weeks, Paul has again tried to disavow racist and homophobic newsletters that were sent under his name in the 1980s and ’90s.

“I miss the closet,” read a 1990 issue of Paul’s newsletter that he now claims he didn’t write. “Homosexuals, not to speak of the rest of society, were far better off when social pressure forced them to live in the closet.” 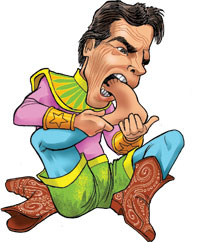 Helping protect LGBT people from unwarranted incarceration, violence and human rights abuses in the most virulently homophobic pockets of the world “is not in America’s interests and not worth a dime of taxpayers’ money,” Perry said in a statement last month.

He was criticizing President Obama’s decision to allocate foreign aide to prevent anti-gay atrocities, which Perry saw as part of an ongoing “war on traditional American values.”

In Rick Perry’s Traditional America, gay soldiers could not serve openly in the military, LGBT couples could not enter into a marriage or civil union, and police could enter a gay citizen’s home and arrest him for engaging in consensual adult sex with another man.

While governor of Texas, Perry signed a Defense of Marriage Act that outlawed same-sex marriage and civil unions in 2004 (two years later a similar statute was added to the state’s constitution). In his 2010 screed “Fed Up!”, Perry decried the U.S. Supreme Court’s decision in Lawrence v. Texas, which decriminalized consensual sodomy among gay adults, as “nine oligarchs in robes” imposing their will on the state (seven years after the landmark decision, Perry was still too much of a doofus to figure out that three of the nine justices dissented in Lawrence). 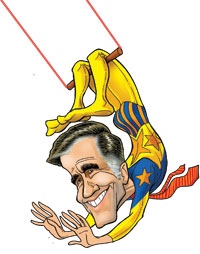 It’s almost tempting to feel sorry for Romney, the way his dignity is affronted by Republican voters’ eagerness to give any candidate a chance except him. He barely placed first in Iowa, in a virtual tie with Rick Santorum despite vastly larger campaign finances.

Romney’s philosophical shallowness and meandering positions on countless issues are partly to blame, but it would be absurd to pretend he isn’t also a victim of discrimination due to his Mormon faith.

How ironic that a member of a church that devotes millions of dollars to discriminating against others (remember Prop 8?) might himself be felled by discrimination.

Romney shares his faith’s opposition to same-sex marriage, but he’s been squigglier on other types of recognition for same-sex couples. He has believed “that certain benefits and privileges should be offered to gay couples” since at least 1994 when he was courting LGBT voters in his senatorial challenge to Ted Kennedy, but insists that he only supported civil unions in 2004 to avoid having to implement same-sex marriage in Massachusetts.

“What I would support is letting people who are of the same gender form, if you will, partnership agreements,” Romney clarified a few months ago. “If they want to have a partnership with someone else and have, as a result of that, such things as hospital visitation rights and similar benefits of that nature.”

Romney is the worst type of bully: the one you thought was your friend until he starts teasing you in order to be accepted by the cool kids. 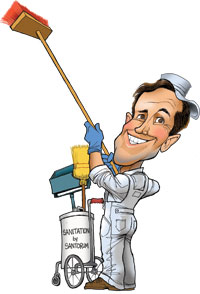 It seems Santorum’s biggest regret in life is having not been alive during the Crusades. The former senator from Pennsylvania sees himself as a holy warrior, and for years has been one of the most hostile anti-gay forces in American politics.

As a U.S. senator in 2003, Santorum compared homosexuality to child molestation, incest and bestiality, and as a presidential candidate he has vowed to reinstate “Don’t Ask, Don’t Tell” and to nullify same-sex marriages that are currently recognized in Massachusetts, California, Iowa and elsewhere.

“We can’t have 50 different marriage laws in this country, you have to have one marriage law,” Santorum said in an interview with NBC last week.

When pressed about the status of already-married same-sex couples should a federal constitutional ban eventually be enacted, Santorum replied, “Well, their marriages would be invalid.”

A Santorum presidency would wage a Judeo-Christian jihad on LGBT rights, so let’s hope this bully gets sent packing before his campaign gains any additional momentum beyond his second place finish in Iowa.

In the meantime, google “Santorum” for a good laugh at an ongoing gay attempt to redefine the dear Rick’s last name.