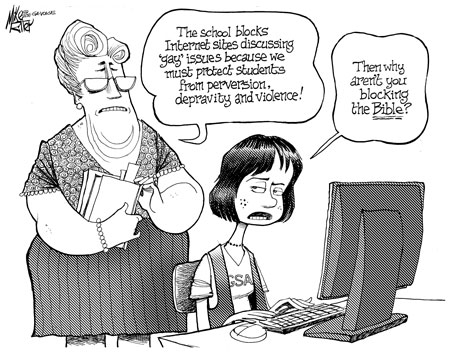 Straight men posing as lesbian bloggers can choke on their keyboards

Good evening. My name is Dyana Bagby. I am a real lesbian and I write under my real name.

I just wanted to make this clear in case some of you had any doubts. And in light of an internet scandal that has rocked the gay — well, specifically, the lesbian — blogging world, those doubts would be understandable. Read More

It’s no secret that I’m in an open relationship with my Netflix instant account. I watch a lot of documentaries and super-dramatic sad movies, but every now and then I’ll indulge my inner queen and look for time wasters in the gay and lesbian genre.

Last night, the Republican contenders seeking the nomination for the presidency of the United States participated in the second GOP debate of the 2012 election cycle. Held in New Hampshire, the debate was broadcast on CNN and was sponsored by the New Hampshire Union Leader.

Seven Republicans attended and answered a wide range of questions on topics from the economy and jobs to foreign policy and social issues. CNN’s John King moderated. Read More

Atlanta Pride doesn’t take place until October, but at least three Georgia cities will host gay pride celebrations on the traditional last weekend in June. The Marietta Rainbow Festival is set for June 24-25, while Augusta Pride and East Side Pride take place June 25.

The Marietta festival is again hosted by the North Georgia Rainbow Coalition and takes place indoors at the New LeBuzz, Marietta’s sole gay bar. The club has a new, larger home at 585 Franklin Road SE in Marietta, and the festival will be held there and at Enigma, next door. Read More