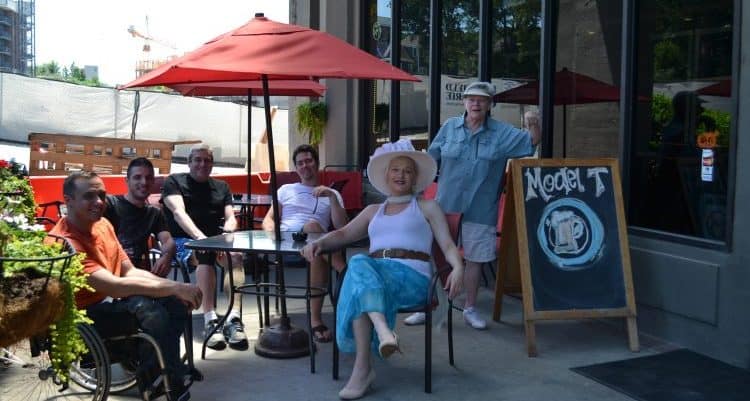 Editor’s note: This is the second in a series examining how development and construction in Atlanta affects LGBT-owned bars and businesses. Next issue, we look at how bars located elsewhere along the BeltLine fare.

From the early 1900s until about World War II, the Ford factory on Atlanta’s Ponce de Leon Avenue operated as a vehicle manufacturing facility.

Twenty-five years ago, in the same building, Jill Darmer opened The Model T, a gay bar with a penchant for preserving history. Darmer kept the original brick walls and even mounted some car parts behind the bar. For the last quarter-century, Model T has been a staple in the Midtown and LGBT bar scenes, drawing in residents from the upstairs apartments and visitors to other area businesses.

But now, the fate of Model T is up in the air: rising rent costs, a symptom of the development of Atlanta’s BeltLine and Ponce City Market, may squeeze the bar and its history out for good.

A path to prosperity?

Thousands of visitors flock to Ponce City Market every day. The converted Sears building sits at the helm of a multi-year, billion-dollar development project known as the Atlanta BeltLine: more than 20 miles of trails following the paths of old railroad tracks, connecting the city together.

“That really was the vanguard of businesses reorienting the BeltLine,” said Lee Harrop, program director for the Atlanta BeltLine. “We work with adjacent property owners, whether it’s to build … stairs or sidewalks or ramps to be connected to the BeltLine.”

Ford Factory Lofts, where Model T is located, once had a pathway to the BeltLine, right behind Ponce City Market. But when the Kroger next door was torn down last year in preparation for a full rebuild, that path was blocked off as part of the construction zone.

“When they first started this construction, the first couple months, we all lost probably 30 percent of our business,” Darmer said. “Then we discovered that the people there at City Market, their employees had to pay $10 to park so then they were parking here.”

She said once the complex began booting cars that weren’t doing business in the lofts, her customer flow did increase somewhat, but she’s not sure it’ll be enough to cover the rising rent costs.

“They went out of business because he wanted to raise their rent so much, like $10,000 a month, it forced them out,” Darmer said. “If he had remained here I’d be safe for a few more years. But being as I’m standing alone … I think he’s looking for big businesses, not little businesses like me.”

The space previously occupied by the restaurant is now also under construction. Darmer said she believes the landlord wants to bring in more retail businesses.

Darmer said if she can make it through the construction dates, when the BeltLine pathway reopens and there’s more access to customers — and visibility to customers coming to get their groceries — she’ll be in a good place. But it’s not evident if she’ll be able to get there.

“I’ve paid all these dues for all these years and you’re going to kick me out because you want a few extra bucks?” she said. “I’d love to be here another five or six years. Unless something changes, I think maybe he’ll give me another year if I luck up.”

Which means there may only be one year left of Model T, period.

“You can’t take the flavor. I mean, there’s no other place that has the ambiance, the original brick walls and all that,” Darmer said. “If I don’t stay here, I don’t know if I want to stay in the business.”

Friends on Ponce is located across the street from Ponce City Market and Ford Factory Lofts.

“We can walk right across the street and walk right to the BeltLine and there’s no obstacles to it,” business manager Lewis Covington said. “As far as the BeltLine goes … when people come in who’ve never been here before, they like it, they come back; that’s success.”

He said originally when the BeltLine was planned, there were supposed to be several thousand residential units that would have helped increase Friends’ customer base. That did not come to fruition, and now there’s closer to just 1,000 units.

“The BeltLine has turned into such a wonderful thing for all of us. It’s really a great thing, but it just hasn’t lived up to its promise. I don’t know how that’s affected our business,” Covington said. “I think if there was more housing, we would have more business.”

Though it’s unclear just how much of this is due to the BeltLine being nearby, Covington did say he’s seen the diversity of his customers increase in recent years.

Friends now markets itself as a neighborhood bar, though it is LGBT-owned and was traditionally geared toward a gay clientele. In addition to visitors from the nearby BeltLine, Friends also brings in overflow customers from the downstairs bar MJQ.

“It’s caused our clientele to be very, very diverse, and that’s what we’ve always wanted. We’re proud of the diversity of our bar. It is a neighborhood bar and we started out as a gay bar, and it has just started enveloping more people and more people have enveloped us,” Covington said.

What the development of Ponce City Market has done to affect Friends, however, is alter traffic patterns.

“That has changed a lot of the traffic. The automobile traffic is ridiculous. It’s absurd. They built that thing, put in more businesses and took away one lane of traffic for a bicycle path. I have not seen one person on a bicycle since they put that lane in there over a year ago and all it’s done is just created a nightmare at rush hours,” Covington said.

Friends has 23 dedicated parking spots, but after hours customers can park at the shopping center next door where Bookstore Pub is located. There’s also street parking, which bugs the neighbors, but customers don’t have much of a choice.

Unlike Model T, Friends isn’t facing unusually high rent increases, and Covington indicated that the bar had no plans to go anywhere. It’s in a multi-year lease and there is a good relationship between Friends and the landlord.

For her part, Darmer’s not giving up yet. She’s sent material to her landlord, trying to convince him of the history, both LGBT and Atlanta, preserved on the walls of her bar. She reached out to Ford Motor Company in the hopes of having them step in to speak with the landlord about the importance of this building. She also plans to speak with City Council and mayoral candidates about Model T’s role in keeping the Ford Factory Lofts a staple for thirsty Atlantans.

“There’s a lot of history here and I think it’s so important, especially as the city grows. [The BeltLine] is supposed to represent old railroad tracks, right? And a new beginning for some things. I feel like they’re choking that off,” Darmer said. “I don’t necessarily think me being gay or a gay establishment has anything to do with it, but I think it should be given consideration, considering where we are. This is Midtown.”

Georgia Voice reached out to D.E.L. Development Corporation, which owns the Ford Factory Lofts Building, as well as Atlanta City Councilman Kwanza Hall, for comment. They did not respond as of press time.