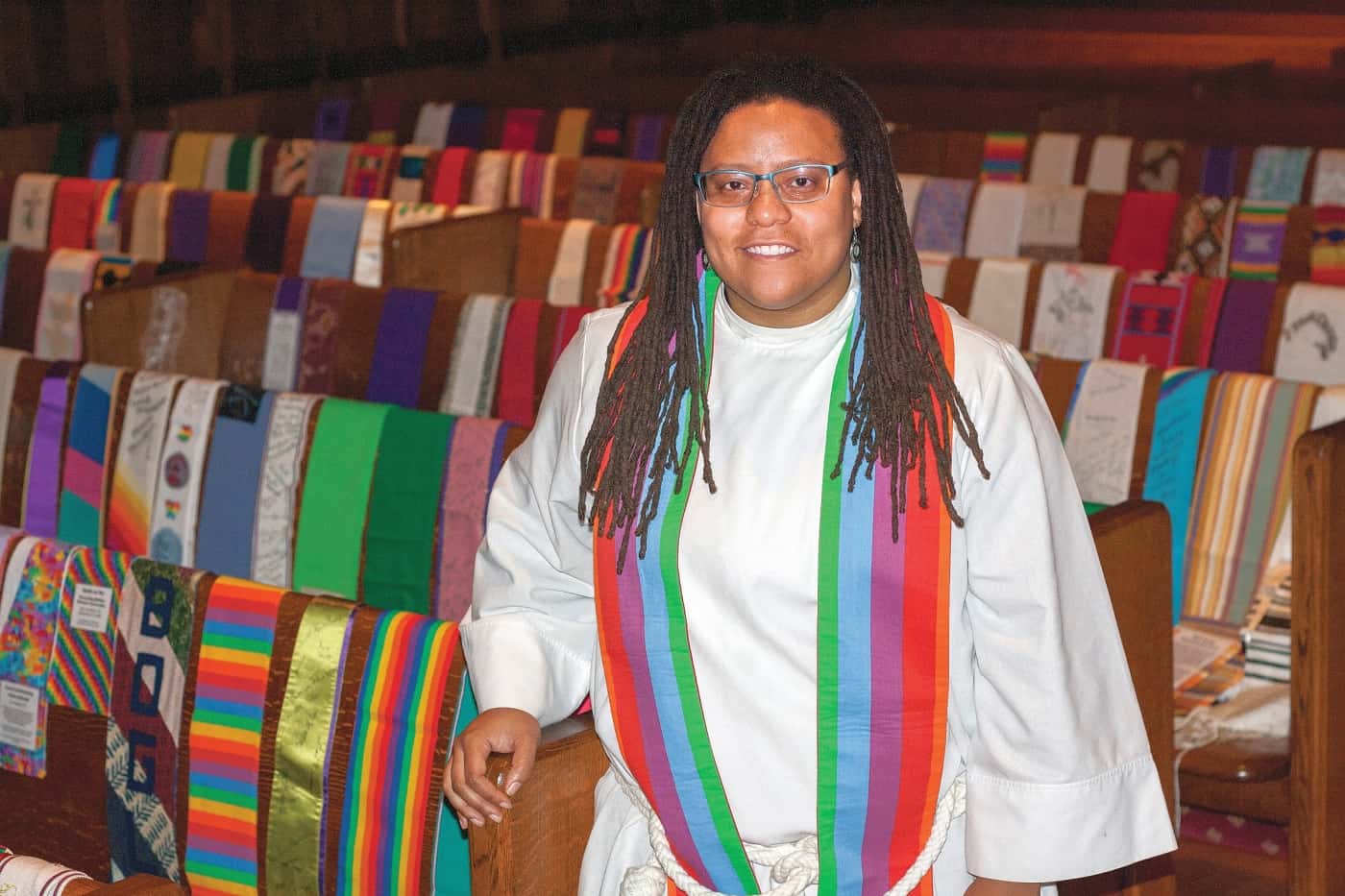 Rev. Kim Jackson knew as a child she wanted to be a pastor.

Raised near rural Cowpens, South Carolina, in a small Baptist Church, she said the people in her home church “nurtured me in the faith, encouraged me to participate in children’s and youth ministries.” When she expressed at age nine she wanted to become a pastor, she was told that was impossible.

“I was told that I couldn’t become a pastor because I was a girl,” she told Georgia Voice.

She moved to Atlanta a decade ago, when she was 22, where she came out as gay, another blow, she was told, in her journey to become a pastor.

“For the Baptist church that I was raised in, I now had two strikes,” she said. “When it became clear that I wasn’t going to be celibate, that was my third strike, and I knew that ordination in my home tradition was not possible. That realization was deeply painful.”

But Jackson then found kindred spirits in the Episcopal Church, and in 2010 she became the first black LGBT person ordained a priest in the Episcopal diocese of Atlanta. She was the chaplain at Absalom Jones Episcopal Center and Chapel at the Atlanta University Center, which serves the students and faculty of Clark Atlanta, Morehouse, Morris Brown and Spelman.

She is now an associate rector at All Saints’ Episcopal Church in the heart of Midtown, married to a Muslim woman and imam. Her story and spiritual journey, she said, is like so many of those honored in the “Shower of Stoles” exhibit she is organizing at her church to be on display during Atlanta Pride weekend.

“For me, it is a story of resilience, and the power of hope and struggle,” she said.

300 stoles on display at All Saints’ exhibit

A stole is a religious symbol worn by clergy. Being forced to give it up because of who you are is often painful for LGBT persons of faith. In 1995, the Shower of Stoles Project was started to commemorate ministers, pastors and others in church that were defrocked because of their sexual orientation and gender identity.

“The collection bears witness to the huge loss of leadership that the church has brought upon itself because of its own unjust policies,” according to the National LGBTQ Task Force Institute for Welcoming Resources.

The national organization makes the stoles available to be exhibited across North America and online, “bearing witness to the lives and voices of GLBT persons of faith who have been silenced by the church.”

Jackson said the Shower of Stoles Project inspires her, and gives her a glimpse of what could have happened in her own life.

“I loved my church home and I knew that my calling to become a pastor was in large part due to the formation that they gave me,” she said of her Baptist upbringing. “If I were 20 years older, then my journey towards ordination would have ended there and perhaps I would have my own stole in this collection.”

There are more than 1,000 liturgical stoles and other sacred materials in the collection. Jackson said there would be 300 stoles on display at All Saints’ Episcopal Church, each with their own story.

“In many ways, the Shower of Stoles tells a part of my own story, but we are hosting this exhibit at All Saints’ because this is an All Saints’ story, an Atlanta story, and indeed, a Pride story,” Jackson said. “So many people who had the gifts and graces to serve as ministers in this city were rejected and banned from ministry because of who God called them to love. Even within our own parish, we hold the stories of gay men who would have made great priests, but they were not allowed to do so because of they were honest and unapologetic about their sexual orientation.”

Jackson said these stories are very much like hers, of having to leave and find another church where she was accepted.

“And this is in particular why the project is near and dear to me,” she said. “Their stories represent thousands of stories just like mine.”
“Today, many mainline denominations have welcomed the ordination of people within the LGBTQIA community,” Jackson added. “This exhibit is a testament to the ways that activism, struggle, prayer and hope have helped the Church open her doors to all of God’s children.”

‘We walk this journey together’

The fight for LGBTQ people to be recognized as people who can serve as ordained ministers in America’s mainline churches has been long and difficult, Jackson said.

“The journey is fraught with pain, and rejection, but the stories contained within the collection of the Shower of Stoles demonstrate that the journey has also been permeated with prayerful people full of hope,” she said.

Atlanta Pride plays a special role in Jackson’s life, including her spiritual life.

“When I first arrived in Atlanta 10 years ago, from Smalltown, South Carolina, I was literally brought to tears by the amount of people and clear displays of love and hope at Pride,” she said.

“I’ve always appreciated the amount of faith groups that are represented in booths and in the parade, but I knew that the story of how, especially, mainline Christian denominations came to the place of accepting gay people was much more complicated than the floats in the parade display,” she said.

She knows there will be plenty of people partying in Piedmont Park over the festival weekend. But she said she hopes some will come visit the church and soak up a positive spiritual experience as part of Atlanta Pride.

“It’s really helpful to have a positive spiritual experience, just as much as our party spirit,” she said. “I hope people visit and walk away feeling a fuller story of the gay experience. As queer people, as people of faith, we walk this journey together.”