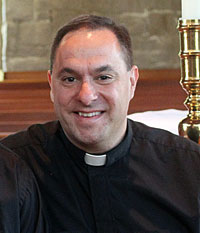 A visit to church might not be an obvious entry in a Gay Pride itinerary, but for more than two decades Integrity Atlanta has made sure the affirmation of Pride extends to the spiritual realm.

“So many people have been battered, bruised, beaten up by organized religion, and our goal is to provide a safe space where that will not happen to them,” said Bruce Garner of Integrity Atlanta, which hosts its 22nd annual Pride Eucharist Oct. 6 at All Saints’ Episcopal Church in Midtown.

“It’s been important for us to offer a space where they will hear of their value as children of God, just the way God made them, without exceptions,” Garner said. “We felt like there was a need within the LGBT community for a safe space to exercise spirituality, and it’s a boisterous, joy-filled, good place to be for the duration of the service.”

Organizers of the Pride Eucharist always arrange for an LGBT clergy member to deliver the sermon, believing it is essential for attendees “to hear from one of our own,” Garner said. This year, the honor goes to Rev. Bradley Schmeling of St. John’s Lutheran Church.

With the support of his congregants, Schmeling fought to remain a Lutheran pastor after acknowledging that he was gay and in a relationship. His battle eventually led to the denomination allowing gay clergy in committed relationships.

“His story is a very important story in history of LGBT people, and ultimately resulted in a change in the policy in the Evangelical Lutheran Church in America,” Garner said. “There’s no longer a barrier to people who are LGBT, even those with partners, serving as pastors of a Lutheran congregation.”