Pride: Trans March puts the ‘T’ at the front of the line 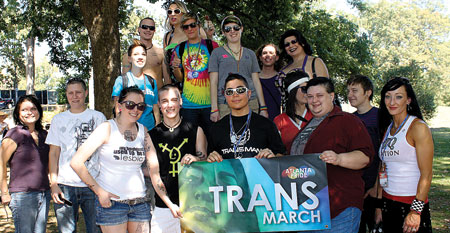 Dozens of transgender people and allies are expected to march through Piedmont Park on Saturday, Oct. 8, carrying banners and signs to ensure Pride participants pay attention to the “T” that is part of the LGBT acronym.

“Out of the alphabet soup that is often used to describe us, the ‘T’ is still the piece that most of the community is still working to understand,” said James Sheffield, executive director of Atlanta Pride.

“I still get phone calls from people who don’t understand why transgender people are included in the gay community at all,” he said.

The Trans March seeks to bring visibility to a group of people often overlooked by many gay and lesbian people, Sheffield added.

“These people are on a mission. How many of us go to an event that talks about LGBT but there is no reference to T other than saying the letter? The march is about bringing direct attention to the trans community to the larger LGB and Q community,” he said.

Three years ago, at the first Trans March, Sheffield marched not only as the executive director of Pride but also in his first major public appearance as a transgender man.

“The Trans March will always hold a special place for me,” he said. “It feels special to me, but it’s also special to provide that space and activity for those who don’t always feel represented in other things going on.”

Speakers are invited to say a few words before the march steps off. This year, Atlanta Pride organizers are also asking volunteers to shout chants to bring added visibility.

“The extra energy that makes all the difference in the world,” Sheffield said.