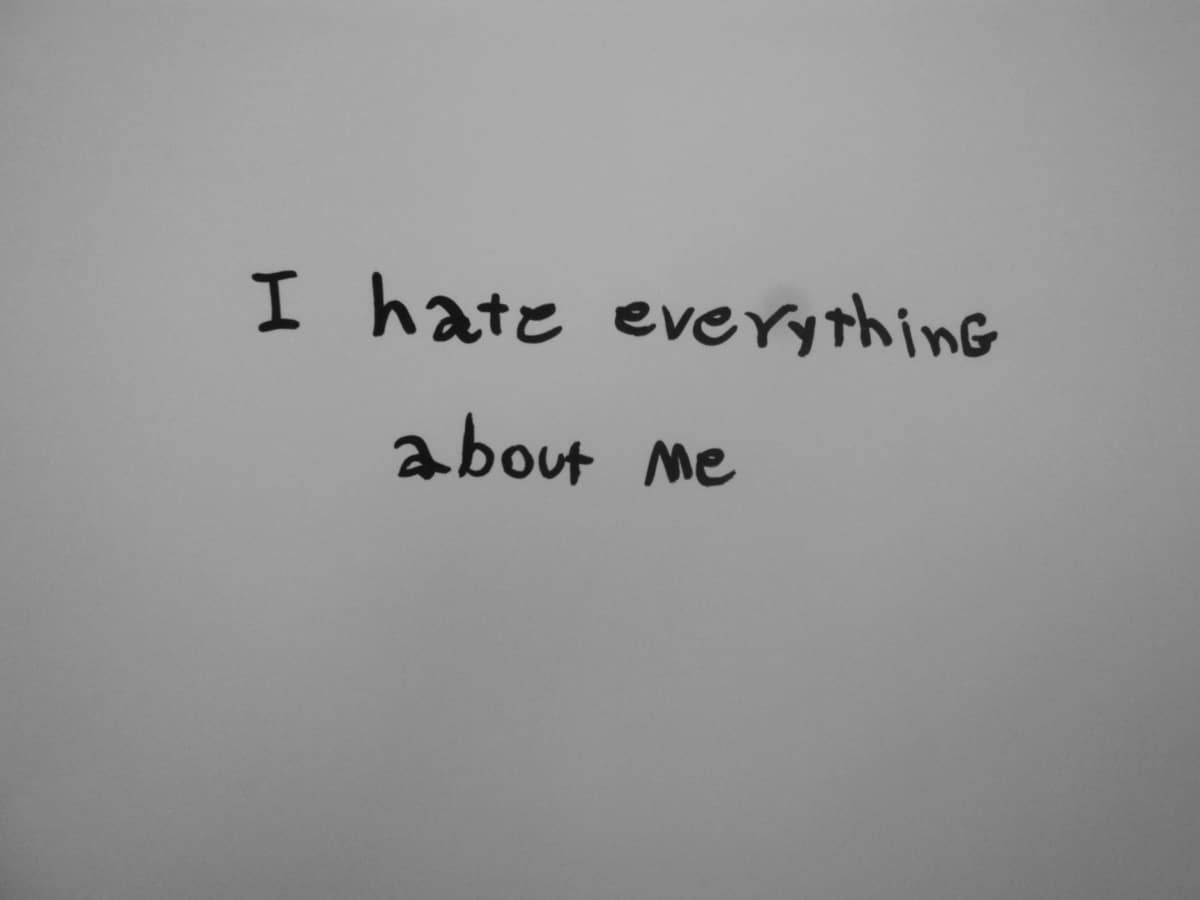 Quit hating yourself: What minority self hatred is, and how to stop

Did you know that the vast majority of perpetrators of violent crimes are men? Ninety percent of murderers are men.

This is a heavy burden, I carry, as a man. I live with the shame and embarrassment that men kill more people. Lots more people. They’re also more likely to have indiscriminate sex with large numbers of sexual partners. Also they’re way more likely to be rapists.

Each day, I wake up, thinking, hoping, that one day, men will change. If they change,  if those murderers stopped murdering, if serial killers stopped serial killing, if raping men stopped raping, if they stopped being such sluts—well, then maybe people would look at me more positively. They wouldn’t assign all of those negative stereotypes to me! And men would be given equal rights.

Just kidding. I don’t think that at all, ever. The idea that any of these negative stereotypes of men bleed over onto me burdens my consciousness approximately 0 percent of my day.

But there was once a time when being gay wasn’t like that—I thought, to myself, at 17, “If gay people weren’t so ridiculous, wouldn’t straight people take us more seriously?”

I had to get over that feeling.  The whole premise is silly. As gay people, we carry around this burden, this shame. We often believe that it’s other gay people who are responsible for the negative stereotyping. The majority, who strip us of our rights, our personhood, somehow need all of us to meet an ever unreachable version of normal—something not required from them.

To respect yourself is to blame those who take your rights from you, not your fellow victims who just don’t appear respectable enough.

This is self-hatred. And this explains why the word “self-hatred” doesn’t sound right, and why nobody who hates themselves will ever hear the phrase “self-hatred” and think, “Oh my God, that’s me! I hate myself!” It seems to be more about your judgment of someone else—the other gays. What does that have to do with you?

Everything, it turns out. When you believe that other gay people reflect on you, you’ve bought the lie, which is that you don’t deserve to be viewed as your own person. You’re OK with other people judging you based on how other gay people are. That’s not cool. Other people don’t have a responsibility to make their group look good. Other people have a responsibility to view you as an individual.
Your identity is your own. If someone wants to assign beliefs to you based on how other people are, that’s on them, not you, and not on the people they base their stereotypes off of.

The burden of appearing “respectable” or “normal” is borne only by minorities, is imagined, and its pursuit accomplishes nothing.  It strips us of who we are. Worst of all, it places the blame on the victim rather than the perpetrator.

To try to be “normal” or push others to be “normal” is to engage in what is called “respectability politics.” This is the idea that our political aims are advanced by pushing an image of our group that is respectable. “We deserve rights, because we’re like you!” is the message. “We wear suits, we work the same jobs, we want the same things: kids, picket fence, etc.”

It’s great to want those things. But it’s dangerous to treat them as some kind of test of entry. We deserve marriage even if we fuck it up. If men had to pass the standard of “normalcy,” as measured by the tendency not to murder people at 10 times the rate of their counterpart, we’d all be wearing ankle bracelets. But we have our rights regardless, as we should. And we don’t carry the emotional burden of worrying about how other men act.

To love yourself includes viewing yourself as your own person, with your own identity, one that isn’t tied to the adjectives attaching to you at birth, or with what other people do with those adjectives. You don’t have a responsibility to make X look good. Neither does anyone else. You don’t deserve to carry the burden of how other people are.
I shudder at the thought of the queer rights movement being hijacked in this direction (so far I think it’s avoided it, despite the money vortex that is HRC, which continues to plaster its logo onto every gay rights success, even the ones it obstructed or did nothing for, and even as its presentation of gay people is stifling).

We’ve seen other movements get sabotaged in this way. Activism for the rights of others have been under assault by those who would suit it, flatten it, straighten it, bleach it, often from within.

So the next time you’re tempted to think, or say, “Well, with gay people doing this, like wearing thongs in a parade, it’s no wonder straight people treat us like that, such as firing us for being gay!” Instead, consider that they treat us this way because they’re a bunch of assholes. That’s what loving yourself sounds like.

Alex Rowland is an Atlanta attorney. Visit his website by clicking here.