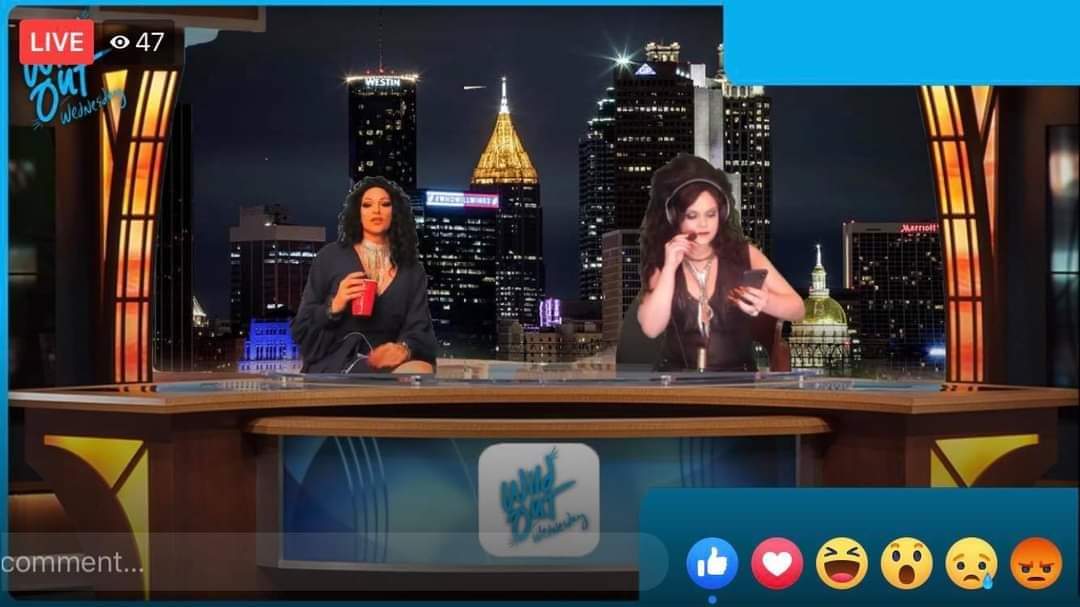 Drag in the Age of COVID-19

For many local drag queens, this spring was the last time they performed in front of a crowded audience. No one would ever have expected that the much-loved and entertaining drag queen performances would ever stop. But just as spring flowers were beginning to bloom, it all came to a halt due to the COVID-19 virus.

In an effort to decrease the number of cases, Mayor Keisha Lance Bottoms issued an executive order declaring a state of emergency and prohibited gatherings of 50 or more people in March. Under the city’s Phase 1 plan, only necessary trips for food, medical care and work were allowed.

But it wouldn’t take long for drag queens everywhere to look for other avenues to perform and try to make some income. So it was no surprise that some found their way onto virtual platforms to entertain.

Atlanta’s energetic drag queen, Taejah Thomas, went all out when she decided to venture into the world of virtual drag shows. “One thing I learned during the pandemic is when there’s no work, you create it,” Thomas said.

In an interview with Georgia Voice, Thomas said that after seeing her friend and fellow drag entertainer, season six of “RuPaul’s Drag Race” alum Trinity K. Bonet, as well D’Asia Cassadine doing virtual shows, she was moved to put on her own production. The plan was to put on a one-time virtual drag show for her birthday on April 19. Overwhelmed by the support she received, she decided to continue to put on virtual shows on Facebook, YouTube and Instagram.

Thomas was determined to give her audience a “real” show experience when they viewed her DollHouse virtual show, even building a whole set in her house to look like a stage in a club.

Besides herself, Thomas invites guest performers who aren’t working other virtual shows. Other times, she makes the guest selections interactive and lets fans make requests via Facebook. “The people made the request, and I made it happen for them,” she said.

Two other local entertainers also decided to take their popular “Wild Out Wednesday” show virtual. Well known drag queen and season two of “RuPaul’s Drag Race” alum, Nicole Paige Brooks, and Mo’Dest Volgare hosted “Wild Out Wednesday” at Noni’s in Edgewood prior to the COVID-19 virus. Although they weren’t the first to put on a virtual show, Brooks said the idea to transition their “Wild Out” show into a virtual one was an organic process. Brooks said Volgare, who had most of the technical and computer experience, said they could still put on their show and have contestants send in their crazy videos, have special guests Skype into the show and performers send in their talent.

For Volgare, the shutdowns came at a good time, because she had been looking for ways to get out of the bars and into an online presence. At Noni’s they had small audiences on hand for their funny and explicit shows, but now they have been able to reach more people.

Volgare said that the most challenging part of the virtual shows is mastering the technology. In an effort to help others, she has posted several video tutorials on YouTube. You can find links to the tutorials at linktr.ee/MoDestVolgare.

“Virtual shows have been a great way for performers to continue to hone their craft and make some money. Brooks said, “It’s been helpful to have a creative outlet. It’s been helpful for my sanity.” In both Thomas’ show and the “Wild Out” show there is no charge to view, but there is an opportunity to make donations; the performers’ Venmo and CashApp information is provided during shows.

While the virtual shows haven’t brought in as much money as in-person, the virtual shows are a way for them to reach larger audiences. “Every guest that I have invited was actually happy to be back on stage performing,” Thomas said. “The only downside was that they didn’t have the ability to connect with the audience like when performing in a club. But they were excited to reach another audience virtually.” The virtual platform has also provided an opportunity for someone who may have never seen a drag show to see one online.

Information on upcoming DollHouse shows can be found on Zedyc L. Thomas’ Facebook page. To watch “Wild Out Live” and send in submissions, visit wildoutlive.com.