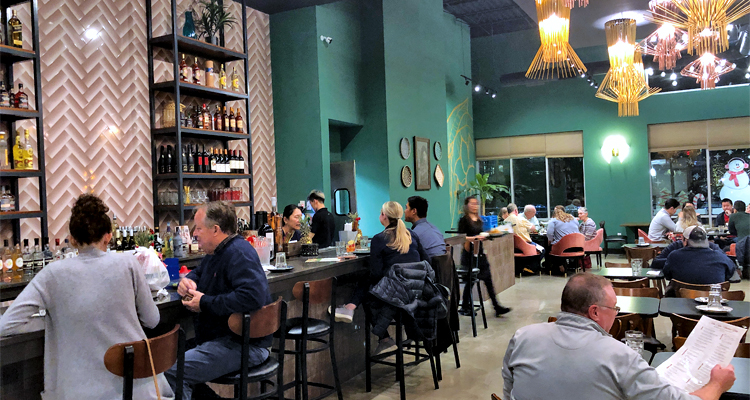 This week, I’m sharing first looks at Mamoun’s Falafel and Chom Chom Vietnamese Kitchen. Both are cheap and somewhat exotic – great for a date with someone you likely will never see again.

Mamoun’s Falafel: If you know anybody from New York, they can likely tell you about Mamoum’s, which opened in 1971 in Greenwich Village. It’s generally credited with introducing Americans to falafel, the Middle Eastern favorite of deep-fried patties made from ground-up chickpeas. The restaurant has 10 locations, including this first one in Atlanta. Five more franchises will open in Atlanta and Athens.

The new Atlanta location is in Buckhead on Northside Drive. It’s the usual non-descript décor with lots of windows and a counter to place orders. Besides falafel, the restaurant offers kebobs and shawarma folded into pita-bread sandwiches or served on combo plates with traditional spreads like hummus and baba ganoush.

I ordered the falafel plate, of course, and I give it mixed reviews. If this were the only place to get falafel in Atlanta, as it was in 1971 New York, I might be more enthusiastic, but falafel is everywhere now and I’ve had better. What supposedly makes Mamoum’s falafel better than others is the huge amount of parsley that turns its interior a vivid green. It is seasoned with garlic, onions, cumin, turmeric, and cardamom. It’s nicely crunchy, but the spices are really mild. (There’s a super-hot sauce available to step up the flavor.) The baba ganoush, made from eggplant, and the hummus, made from chickpeas, were both unfortunately bland – almost tasteless. The plate was served with an extremely thick slice of pita to scoop the spreads.

My friend ordered the falafel plus shawarma. That’s lamb cooked on an upright rotisserie and shaved off in thin slices. It had better taste than many I’ve sampled over the years, but it was dry as hell. Finally, I tried one of the dessert pastries – a mabrumeh, which is twisted filo dough topped with mixed nuts and a sweet syrup. Not bad, but I’m betting the baklava is better. Actually, I’m betting everything gets better. (1269 Northside Dr., 404-390-3007, mamoums.com).

Chom Chom Vietnamese Kitchen: As I’ve written many times, Vietnamese food is my favorite on the planet. It’s an indigenous cuisine that the French slightly hybridized during their long occupation of Southeast Asia. This newish restaurant is located in a towering white building that seems completely out of place in its location a block from Buford Highway. I guess it’s an example of the gentrification that is now creeping outward everywhere.

This is not another pho café. There are a few soups on the menu, but this is not the place to go for that. There are however, plenty of my favorite bowls of rice noodles (bun) with fresh herbs. I usually top the noodles with a few chunks of spring rolls, grilled shrimp, and some caramelized pork. During my one visit here, I ordered the Hanoi bowl with lemongrass pork sausage patties, pork belly, bean sprouts, garlic, noodles, and herbs. The problem (for me) was that all of the ingredients were plated separately, so you have to dip here, dunk there, scatter everywhere. I’d definitely go for one of the menu’s composed bowls unless you enjoy working for your noodles. We also tried the shaking beef – cubes of tenderloin cooked rare in a “shaking” wok. It was perfect. For starters, I recommend the soft shell crab and the crispy wontons filled with pork. Take home one of the banh mi (sandwiches), perfect for midnight gluttony. (2390 Chamblee Tucker Rd., 470-375-3190, chomchomatl.com)