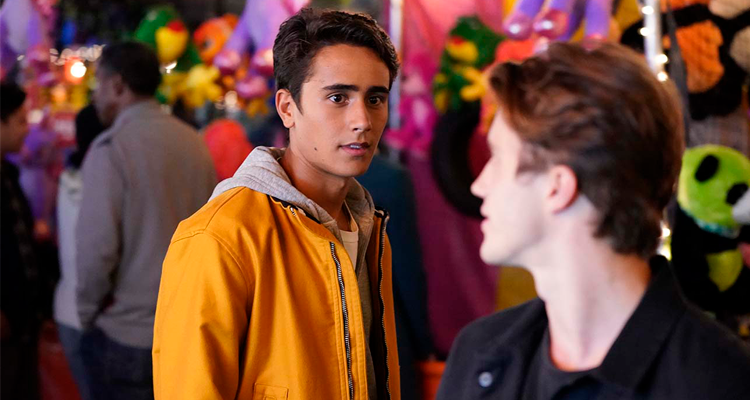 As Brian Tanen awaited word on whether or not his series, “Grand Hotel,” would be renewed, he got an offer he eventually knew he had to leap at—being a co-showrunner and executive producer of the new series, “Love, Victor.”

“I hesitated for half a beat because I had another commitment that I wasn’t sure was going forward and I had just come off a grueling year,” he says. “Yet I knew in my heart that I loved the movie so much and the opportunity to be part of a show that had a gay teen protagonist at the center was something I did not want to pass up.”

In the new series, a spin-off of 2018’s “Love, Simon,” Victor Salazar (Michael Cimino) is a new student at Creekwood High School in Atlanta who is struggling with his sexual orientation. He thinks he may be attracted to other guys, but soon begins dating popular Mia (Rachel Hilson). Aware of what Simon dealt with earlier, Victor reaches out to the older Simon—now in New York—for some advice.

From the very start, Tanen and creators Isaac Aptaker and Elizabeth Berger knew that this series was going to tell a different story from the film.

“’Love, Simon’ was wonderful but is a somewhat idealized coming out story wrapped up in a nice little bow after two hours,” he says. “I thought there was an opportunity to tell a story over time in multiple episodes that was more nuanced and had greater amounts of conflict and difficulties for this character and his journey. We felt a good first season was a character who—like many people growing up young and LGBQ—was in the first step of identifying and coming to terms with it and being proud of it.”

Tanen is gay, as are other members of the writing team. It was important for them to make Victor’s journey feel real. “When you are a young person struggling with these issues one of your biggest fears is creating problems for your family and not being the golden kid anymore that you might have been in your youth. Having a family that is going through something felt like a good backdrop.” Victor’s parents Armando (James Martinez) and Isabel (Ana Ortiz) have recently moved from Texas to Atlanta, and as the series progresses, some of their marital issues come to the surface.

Nick Robinson, who played the titular character in “Love, Simon,” is a producer of the series. “We knew from the beginning that we wanted Nick to be part of the show and I think it’s genius the way Isaac and Elizabeth connected the world of the TV show to the film,” says Tanen. “Victor feels like he has no one else. Simon helps Victor through his problems with encouraging narration.”

In the writers’ room, the relationship between Victor and Simon was special. “For a lot of young LGBTQ people, you feel a little bit alone when you are going through this journey and along the way you meet people who have gone through this experience before you and you develop relationships that feel very close to mentorships in a way,” says Tanen. “That is something we try and convey—this idea that it can feel lonely but once you get to the other side and you come out there is a community of people who become almost instant family. The relationship between Victor and Simon felt authentic.”

Tanen himself didn’t know many gay people growing up in South Florida. He had a liberal family, but didn’t see much LGBTQ representation on TV or in film. “It hasn’t been until recently that gay characters are prominent on TV and film. It wasn’t until college that I began interacting with other openly gay people and realizing my feelings were normal and something to be embraced and proud of.”

While “Love, Simon”—based on Becky Albertalli’s novel “Simon vs. the Homo Sapiens Agenda”—was filmed in Atlanta, “Love, Victor” is shot in Los Angeles and struggles somewhat in its knowledge of the area. Yet it’s hard to ignore the sweetness of the series.

“Love, Victor” was originally slated to air on Disney+, but the network got cold feet and dropped it—and Hulu stepped in. Tanen is excited that the series will have the opportunity to explore more of Victor’s personal discovery as he evolves into adulthood. Although the cast and crew won’t know for a while, the hope is that the series will be picked up for a second season and have a long life on the streaming service.