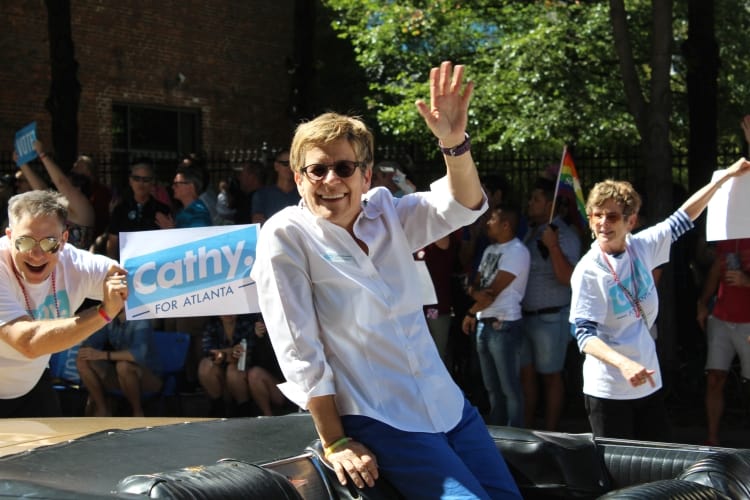 “I have been advocating for our LGBT rights since the 1980s,” Woolard, a former lobbyist for Georgia Equality, said in a prepared statement. “I’m not someone who just shows up when it’s easy or to take a pretty picture. As a lesbian, the fight for fairness and equality is personal, and I will continue to advocate for the rights of every marginalized person. As mayor, I will use my position to push for full civil rights at the state, regional, and national level.”

The Atlanta mayoral race is one of several municipal elections that will take place this November, with the contest to decide who succeeds the term-limited Kasim Reed almost guaranteed to go to a runoff the following month.

The full statement from Georgia Equality:

Cathy has a long history of advocating for and enacting LGBT inclusive policies in Atlanta and around Georgia, including fighting for domestic partner benefits and marriage rights, parental rights and the state’s only comprehensive human rights municipal ordinance that passed in 1999. She has shown a serious commitment to issues such as affordable housing, equity and inclusion, and addressing HIV policy that helps to secure the lived equality that matters most to the LGBT community in Georgia. Cathy has also worked hard for other social justice issues in Atlanta including her work with CARE, League of Conservation Voters and Planned Parenthood.

“Cathy Woolard has spent much of her life leading the fight for LGBT equality around the country and in Georgia, going back to the 1980s,” said Jeff Graham, executive director of Georgia Equality. “The progress we enjoy today really rests on the shoulders of champions like Cathy. LGBT people would not have civil rights protections in Atlanta if it weren’t for her. We couldn’t have defeated all of the anti-gay legislation in the Capitol in recent years if it weren’t for Cathy. She has been, and continues to be, a remarkable leader for our community.”

In issuing this endorsement, it is also important that we recognize that Georgia Equality has previously endorsed and worked with most of the serious candidates in this race. We cannot understate the good work many of them have done on behalf of Atlanta’s LGBT community and we look forward to working with them as they continue their public careers.

Electing Cathy Woolard as Mayor of Atlanta, would be a game changer for LGBT Atlantans and Georgians in a way that the election of any other candidate for mayor would not. Having Cathy as mayor will ensure that one of the most important leaders in Georgia politics is an out lesbian with a 30 year history of working directly on LGBT issues and will amplify the voices, needs, and issues that affect the 350,000 LGBTQ Georgians.