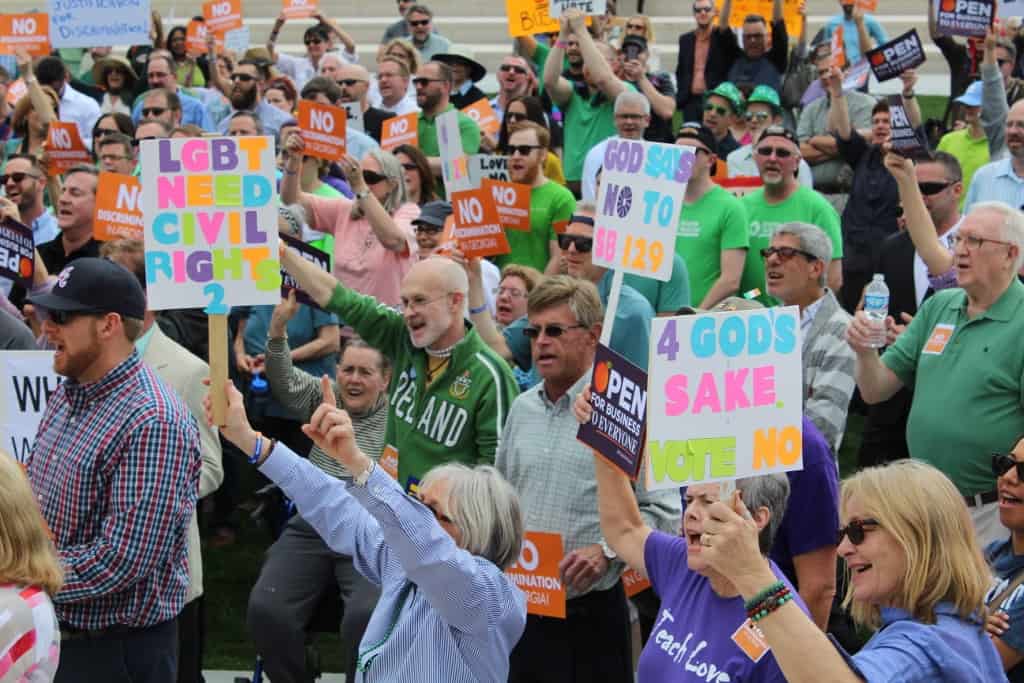 This year, the group hired Whitley, a former federal prosecutor and U.S. Justice Department official, to do an analysis of HB 757, the anti-gay hybrid “religious freedom” bill that has created a national backlash.

Whitley delivered his analysis to the offices of Gov. Nathan Deal and House Speaker David Ralston on Wednesday. He starts off by denouncing the name of the anti-gay language that was inserted into the bill last week:

As an initial matter, I note the contradiction that HB757’s drafters have deemed it the “Georgia First Amendment Defense Act.” As you are no doubt aware, the First Amendment of the United States Constitution needs no legislative “defense.” The First Amendment in and of itself protects all Americans’ rights to speech, to worship freely, and to be free from a state-established creed. These rights do not need the General Assembly to legislate in order to give them force or effect. Any Georgian who believes that his or her First Amendment rights are violated may invoke those protections in an appropriate court of law without the addition of state law.

But the bulk of the analysis is about how the bill permits discrimination and denies equal protection of the laws:

I do not use the term “discriminate” lightly. It is a long-held principle of Anglo-American law that those who do business in the public space must do business with all those who lawfully enter their establishments.’ Indeed, with respect to a customer’s race, sex, or national origin, this principle has been codified in the Civil Rights Act of 1964. But Section 2-2 provides that a “person or faith-based organization may assert a violation of this chapter as a claim or defense in a judicial . . . proceeding,” as well as immunizes such individuals and organizations from a broad range of “adverse action[s],” including any “penalty[] or payment” assessed by the “judicial branch[].” In other words, any individual who is refused services, goods, or accommodations based on his or her marital status would have no cause of action against such person or organization, and courts would be barred from granting any damages or injunctive relief to the refused individual.

A list of discriminatory situations possible due to the broad language in the bill about people’s religious beliefs “regarding lawful marriage between two people”:

And a few more, this as it relates to government employees:

If the Act becomes law, Georgia may become powerless to terminate or otherwise discipline a wide range of government employees if they used their personal beliefs about marriage as an excuse for refusing to do their jobs. Division of Family and Children Services employees might refuse to process Temporary Assistance for Needy Families benefits for single mothers. Public school teachers could claim that the,,,do not have to teach the children of same-sex couples. Indeed, there would be nothing to stop a small minority of persons with unpopular opinions from obtaining government positions with the express intention of using their religious beliefs to discriminate against certain classes of married persons.

Finally, Whitley says passage of the bill “would lead to real harm to many people”:

After surveying this piece of legislation, I note that in the name of tolerance, this legislation likely will cause more in the way of intolerance for those whose private marital and family relationships may be disfavored by a particular faith. Georgia does not need to enact a law such as this to maintain the freedom of religion or protect deeply held religious beliefs, which the Constitution and Bill of Rights already protect. Moreover, no person should have religious beliefs imposed on them without their consent. While I am sympathetic to the fact that a number of my fellow citizens have been led to believe that their personal beliefs are unprotected absent such legislation, as I have shown, this is simply not the case. Instead, passage of the Act likely would lead to real harm to many people, as well as to our State and its reputation.

McKoon, never one to shy away from debate on social media, was quick to jump in following the AJC’s posting of the analysis:

Did anyone ask how much he was paid for the opinion? #gapol https://t.co/5acmafPDZw

It was a busy morning for McKoon, who reportedly called Kelvin Williams, the telecom CEO who said he would pull his business out of Georgia, an “anti-religious bigot.”

Some context: the comment came following a story from Georgia Pol on Williams’ social media activities. In short, the man doesn’t hold back on his opinions about religion, Ann Coulter, the Republican Party or late U.S. Supreme Court Justice Antonin Scalia.

Williams defended himself in a lengthy response to the story, writing, “I find it absolutely HILARIOUS that you guys want a First Amendment Defense Act, but you wanna “shame” me for my posts on social media–which are “free speech” (a right also provided by the First Amendment). Listen, there’s NOTHING I have put online that I’m ashamed of.”