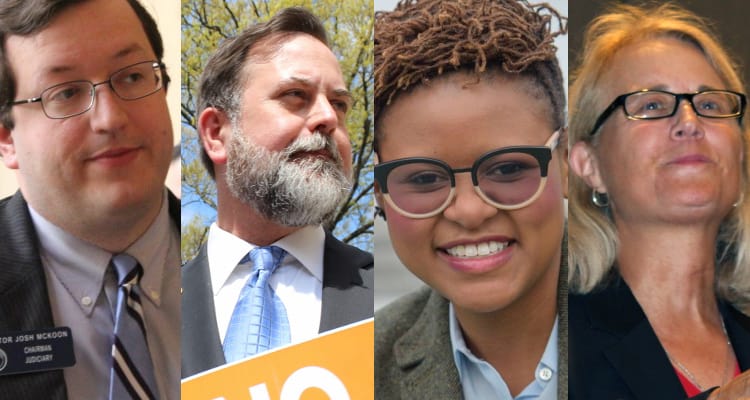 Day 30 of Georgia’s legislative session is a milestone day in the world of state politics. It’s the final turn of the race leading into the straightaway and then the finish line on March 24. Day 30, or Crossover Day, is the last day for bills to move from one chamber to the other and have an open path to becoming law this year—however, language from a bill that hasn’t “crossed over” can still be attached to a bill that has.

Crossover Day came and went on Feb. 29 this year, and of the slew of so-called “religious freedom” bills proposed in the first 30 days of the session, none of them have attracted more attention than House Bill 757—the “Pastor Protection Act” in name only ever since the language of state Sen. Greg Kirk’s (R-Americus) anti-LGBT First Amendment Defense Act was inserted in during a committee hearing last month, leading to passage in the Senate on Feb. 19.

The public pressure has been immense, with the business community in particular taking a visible stand. There’s Georgia Prospers, the coalition of over 300 businesses formed to combat such bills, with heavyweight members like Coca-Cola, Delta and Google. There’s a new business that comes out seemingly every day to voice their opposition to the bill, from Salesforce to Microsoft to Virgin.

It’s led Gov. Nathan Deal to huddle with House Speaker David Ralston to figure a way out of the national spotlight without stripping so much from the bill that conservative legislators find “For Sale” signs stuck in their lawns when they return home to their districts later this month.

‘I really hope that the bill will die’

Lesbian state Rep. Karla Drenner (D-Avondale Estates) was not surprised that the backlash to last summer’s U.S. Supreme Court decision on same-sex marriage would be this fierce. She calls it “the worst session that we’ve ever had in our entire community’s life.”

“I really hope that the bill will die,” Cannon tells Georgia Voice. “I think it’s quite disgraceful that our state would move to pass legislation that could harm our economy, harm peoples’ lived experience and also where they work.”

However, state Sen. Josh McKoon (R-Columbus) stands by his vote in favor of the bill as it is currently written and criticizes business leaders who have spoken out about it yet do business in countries where LGBT people can be imprisoned or worse.

“A lot of these CEOs are happy to make a statement to curry a little positive PR using the Georgia General Assembly as a foil, but if it comes to actually losing some money off the bottom line to pull out of countries that have these terrible criminal laws in place, they’re just absent without leave I guess is the best thing I can say about that,” McKoon tells Georgia Voice.

McKoon references the election of Sen. David Perdue (R-GA) and the rise of Donald Trump in the Republican presidential race, saying he’s not surprised by their ascent and that it’s due in part to establishment Republicans “pretending they are conservative.”

“I think that failure to act on a substantive, meaningful religious freedom measure in 2016 will be cataclysmic for the Georgia Republican party,” McKoon warns.

Drenner says that while she thinks it would be nice for no such bill to pass, “The win for our community would be the most narrowly-focused bill possible. It’s still a loss—I don’t want people to misunderstand what I’m saying,” she says, adding, “I’m saying that a win would be if there was a compromise and it didn’t encompass the whole entire world. Maybe if it was just more like marriage-related activities. That would seem to be better than what’s out there right now with FADA attached to the Pastor Protection bill.”

Jeff Graham, executive director of Georgia Equality, says that while the public pressure has begun to work, those who oppose the bill need to remain active and vocal as the session dwindles to a close over the next few weeks.

“A lot of attention right now is on HB 757, but there are many bills, especially on the House side related to religious exemption legislation, that could be substituted into House Bill 757,” Graham says. “When they’re talking about ‘still working on the language,’ we need to make sure that they don’t just take the language from some other bill and put that on there in replacement of the horrible language of the First Amendment Defense Act.”

Meanwhile he says his group will keep reviewing the remaining legislation and seeing if there are areas of compromise. Graham, Human Rights Campaign president Chad Griffin, Lambda Legal’s Simone Bell and about 50 concerned citizens delivered 75,000 emails and postcards to Gov. Deal’s office on March 2, in a show of the size of the opposition to such a bill.

And no rallies against the bill are scheduled as of yet, with Graham saying he doesn’t know if another one will happen or not.

“Rallies, while they’re important, it really is that direct constituent contact that has slowed down the process and can stop bad legislation from happening and that’s really where we have our efforts focused right now.”