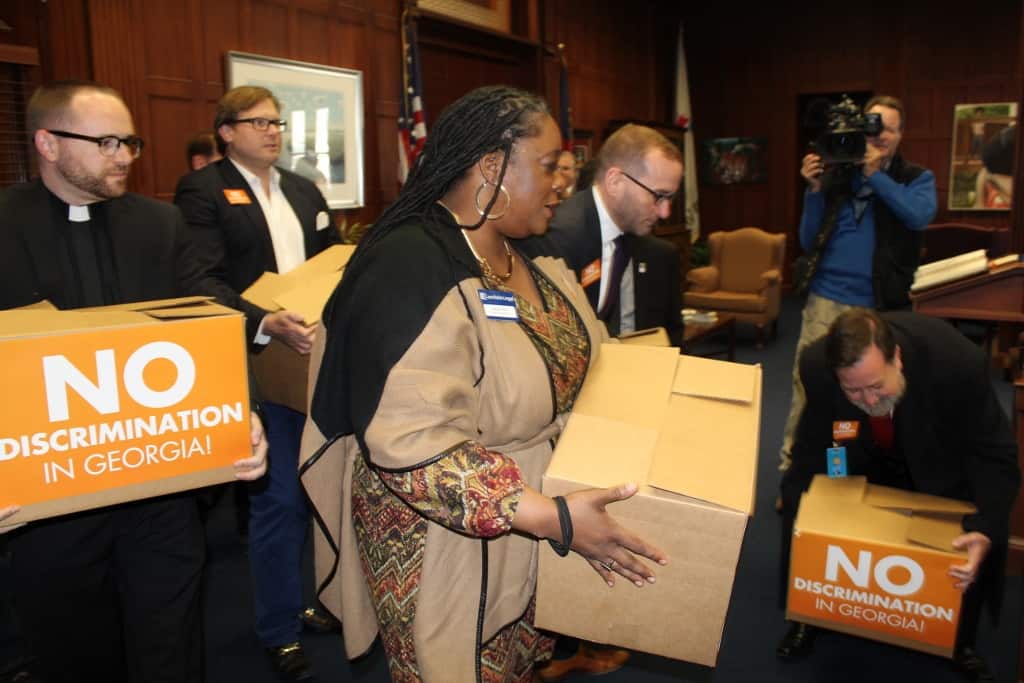 That’s how many emails and postcards the groups delivered to the governor’s office, showing how large the opposition is to House Bill 757, the anti-gay so-called “religious freedom” bill that has rocked the Capitol this year.

“Today, I join with leaders from some of our key national partners—the Human Rights Campaign and Lambda Legal—to make sure that the voice of the majority of Georgians who oppose allowing businesses to refuse to serve people on religious grounds and support protecting the LGBT community against discrimination are heard,” said Georgia Equality executive director Jeff Graham. He was joined by Human Rights Campaign president Chad Griffin and Lambda Legal southern regional director Simone Bell at a press conference across the street from the Capitol at Central Presbyterian Church preceding the delivery.

“At its core, the dangerous so-called First Amendment Defense Act of Georgia would intentionally and explicitly create broad loopholes in state law in order to authorize taxpayer-funded discrimination under the false premise of religious liberty,” Griffin said.

Graham cited research released last month by the Public Religion Research Institute showing that two-thirds of Georgia residents support laws that would protect LGBT people against discrimination in employment, housing and public accommodations, and just one-third support allowing small business owners to deny service to gay and lesbian couples based on their religious beliefs. All three speakers pointed out that no state or federal laws offer explicit protections based on sexual orientation or gender identity.

The day’s event and the media presence it drew reiterated how much attention and controversy HB 757 has drawn, a backlash sparked by the insertion of language from state Sen. Greg Kirk’s anti-LGBT First Amendment Defense Act into the bill last month. The Senate passed the amended bill Feb. 19 and Gov. Deal has been working behind the scenes with House Speaker David Ralston since then to tamp down some of the more controversial aspects that drew a massive outcry from business groups across the nation.

“Any bill that makes Georgia workers, families and others vulnerable to the prejudices of anyone who might claim a religious reason is wrong for Georgia. That’s not Peach State values of fairness and respect for all,” said Bell. “These bills seek to create a ‘freedom to discriminate,’ twisting the intent of our Nation’s founders beyond recognition. We are seeing this across the country — bills that say they are about protecting one thing while actually targeting and seeking to validate discrimination against LGBT people, with dangerous implications for everyone else.”

All eyes are on the House to see what happens with the bill. There are a number of options, but state Rep. Wendell Willard (R-Sandy Springs), chairman of the influential House Judiciary Committee, said recently on GPB’s “Lawmakers” that he assumes the House will disagree with the Senate’s changes, which would send the bill back to the Senate, likely leading to the creation of a conference committee made up of three Senators and three House members who will then take up the bill.