The U.S. Supreme Court has almost certainly made its decision about the right to marry for same-sex couples. The justices met in private conference on Friday, May 1, and took a vote. They have until June 30 to issue their decision.

Most legal observers who watched or listened to the oral arguments from April 28 in Obergefell v. Hodges, an appeal seeking to strike down bans on same-sex marriages in four states, predict Justice Anthony Kennedy will vote with the court’s four liberal justices and find the bans unconstitutional. A few, like University of California School of Law Professor Erwin Chemerinsky, believe the vote could even be 6 to 3, with Chief Justice John Roberts on board. 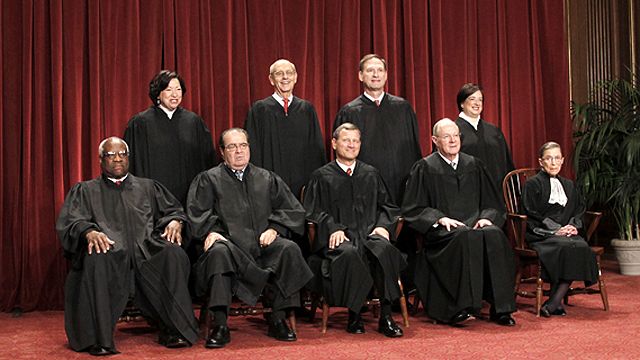 Those who think Roberts could join a majority to strike down the laws were heartened by a question he posed to the attorney defending Michigan’s ban, John Bursch.

“I’m not sure it’s necessary to get into sexual orientation to resolve the case,” said Roberts. “I mean, if Sue loves Joe and Tom loves Joe, Sue can marry him and Tom can’t. And the difference is based upon their different sex. Why isn’t that a straightforward question of sexual discrimination?”

If the court decides state bans on same-sex marriage constitute sex discrimination, “then I can promise you that lawyers in almost any case where a law discriminates against gay people will make the argument that the law constitutes unconstitutional sex discrimination,” said Roberta Kaplan, who argued on behalf of Edith Windsor in the case that struck down the Defense of Marriage Act (DOMA).

“On the other hand, there is always a bit of a disconnect with this argument, particularly when it’s clear that the law at issue was passed to treat people differently based on their sexual orientation, not their gender.”

For instance, Kaplan said she would be surprised if a ruling in Obergefell will stop the passage of the growing number of laws attempting to provide a religious exemption for businesses to discriminate against LGBT people. The impact of those “religious freedom” laws, she said, is going to be “hotly litigated, no matter what.”

What about ‘heightened scrutiny?’

Many had expected the Supreme Court might use the Obergefell case to designate the level of judicial scrutiny for courts to use in evaluating laws that disadvantage LGBT people. To date, the high court has used only the easiest level: requiring governments to identify a legitimate rational purpose for the law. And many had hoped the high court would at least designate “heightened scrutiny,” the same used for laws that discriminate on the basis of sex.

But there was almost no discussion in the Supreme Court on April 28 about the level of scrutiny that discrimination based on sexual orientation should merit.

But Kaplan said the court might not have discussed the level of scrutiny because “the justices have already decided not to address the issue in Obergefell, similar to their failure to address it in Romer and Windsor.”

Interestingly, during oral arguments on California’s Proposition 8 case in 2013, it was Kennedy who said he was “wrestling” with the idea of sex discrimination. But that case was dismissed on a procedural issue, and Kennedy’s authorship of the majority opinion in U.S. v. Windsor found DOMA served “no legitimate purpose.”

And Roberts’ seeming willingness to recognize sex discrimination in the context of bans on same-sex marriage stood in stark contrast to his equally blunt comment to same-sex couples’ attorney Mary Bonauto.

To that remark, Harvard Law Professor Charles Fried said he would have replied, “So what?”
“At one time, people thought women were inferior to men intellectually and physically, and Aristotle thought women made no contribution to the genetic component,” said Fried, a U.S. solicitor general under President Reagan and a former member of the Massachusetts Supreme Judicial Court. “They were wrong then, and we think we’ve got it right now. If I had been arguing … I’d have said, ‘Maybe that was the definition back then, but it’s the wrong definition of the concept we’re talking about now.’”

Jenny Pizer, law and policy project director for Lambda Legal, said that limiting the definition of marriage to only male-female couplings is “a sex discrimination problem right on its face” because it “involves a core sex stereotype that men should seek intimate relationships with women, and vice versa.”

And, she noted, many lower courts have already recognized as sex discrimination certain harassments of gay men at work and the denial of spousal benefits to employees with same-sex spouses. Among them were federal district court decisions in California on the Proposition 8 case (Perry v. Schwarzenegger) and the federal benefits case (Golinski v. U.S. Office of Personnel Management).

Pizer said the majority could be heading toward a conclusion that says a state ban on marriage for same-sex couples is sex discrimination on its face and is based on gender stereotypes.
A number of legal observers commenting on last week’s oral argument have been saying much the same thing. For instance, Cornell law professor Michael Dorf wrote: “[L]aws that ban SSM do not merely draw formal distinctions based on sex. They rely on the very sorts of stereotypes about proper sex roles that the modern sex discrimination cases condemn as the central problem with laws that discriminate on the basis of sex.

And a ruling like that, said Dorf, would have “broad implications for other state laws and policies that discriminate on the basis of sexual orientation.”

But it’s not clear why Roberts asked the question about sex discrimination. And his question regarding sex discrimination has to be viewed against the backdrop of his dissent in Windsor. There, Roberts prominently stated, “Interests in uniformity and stability amply justified Congress’s decision to retain the definition of marriage that, at that point, had been adopted by every State in our Nation, and every nation in the world.”

The “at that point” phrase may say something important, too, especially given Roberts’ subsequent statement in the Windsor dissent that, “The Court does not have before it, and the logic of its [majority] opinion does not decide, the distinct question of whether the States, in the exercise of their ‘historic and essential authority to define the marital relation,’ may continue to utilize the traditional definition of marriage.”

The transcripts and audio recording of the oral arguments in Obergefell v Hodges are available at supremecourt.gov. (Click on “Oral Arguments” in the black band under the banner; then on the pull-down menu, choose either “Argument Transcripts” or “Argument Audio”)