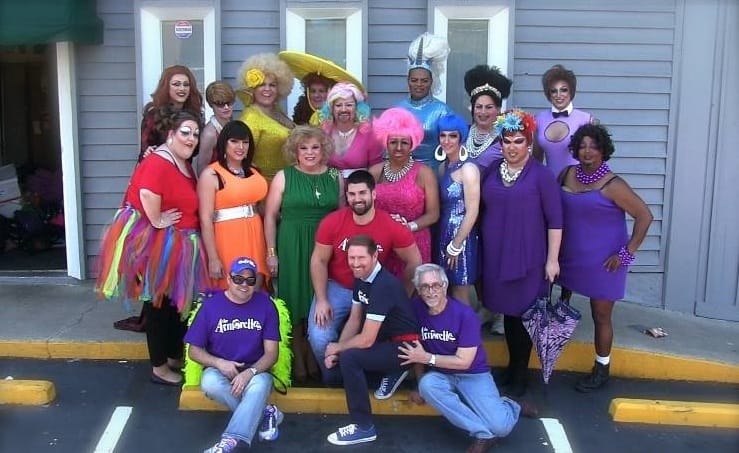 Which drag troupe has been doing it in Atlanta for a span of five decades? And which one donates 100 percent of their tips to the fight against HIV/AIDS? The Armorettes of course, who haven’t lost a step, as they proved by being voted ‘Best Drag Show’ by readers in GA Voice’s 2014 Best of Atlanta awards.

But HIV/AIDS fundraising wasn’t the original intent of the group. The Armorettes started because, well, the Atlanta Falcons sucked. In the late 1970s, gay men would gather at the late, great Armory on Sundays to watch the Falcons games. But the team was horrible in those days, so bar manager Greg Troia hit upon an idea to keep the crowds around—a camp drag troupe.

And the Armorettes were born.

Soon after, the AIDS epidemic hit and the group’s focus changed. “The group took on the mission of raising money to care for the men and women who were dying before their eyes,” says Trashetta GaLore, aka Kevin Crumsey.

The Armorettes claim to be the first and only drag troupe in Atlanta that donates all of its tips to charity. The Sisters of Perpetual Indulgence do the same, but they don’t classify themselves as a drag group.

Funds get spread around to multiple HIV/AIDS charities, particularly those who don’t receive a lot of support elsewhere.

“In other words, the little guys with big hearts,” GaLore says.

The group has raised more than $2 million for AIDS support services since its inception.

‘WE ARE NOT BOUND BY WHAT IS SUPPOSED TO BE BEAUTY’

The Armorettes experience isn’t always politically correct, and, honestly, what drag show is? But it’s always funny, and even heartwarming as those who have witnessed the group end the night with a sing-along to “No Day But Today” from the musical “Rent” will tell you.

“You will leave the show entertained, feeling loved and we will make you rethink your feeling on drag,” GaLore says. And she’s quick to answer when asked what appeals to the group about doing camp as opposed to other kinds of drag.

“The freedom of expression,” she says. “We are not bound by what is supposed to be beauty. We can and are political. Camp drag queens define themselves and are not defined by pop culture.”

And they don’t define themselves by a particular age either, as you’ll see Armorettes from age 25 (Ryan Gray aka Shalita Salad) to 55 (Darrel Boatright aka Vivian Valium, who joined back in 1991).

It’s clear where the Armorettes get their inspiration. GaLore recalls one fan who approached her after a show.

“He said he had been diagnosed with HIV and was depressed and was thinking of killing himself,” she says. “He said seeing us had renewed his spirit and will to live.”

And you can rely on them to keep doing it again every Sunday night at Burkhart’s and every third Saturday of the month at The Heretic, but there is an end date in mind for the final Armorettes show.

“We will be here again until we find a cure for HIV/AIDS,” GaLore says. “Then and only then will we go gently into the night!”