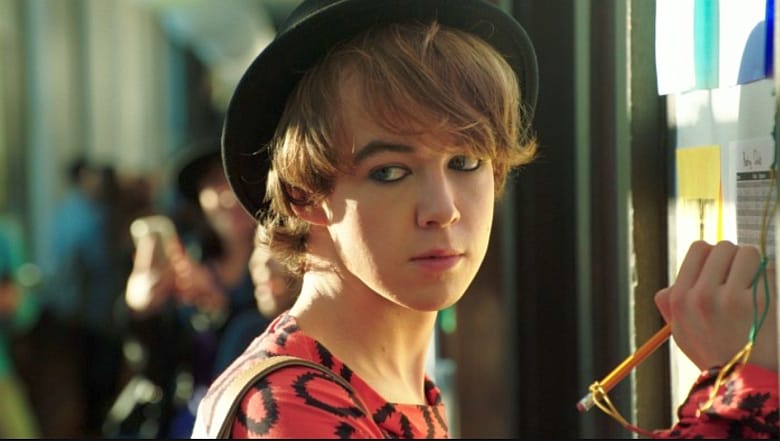 When Out on Film released the roster for 2017’s festival, “Freak Show” was one of the films set to be screened at the festival on Oct. 5 at Landmark Midtown Art Cinema. This brilliant movie is about boldly confident, eccentric gay teen Billy Bloom, raised by a fabulous (although alcoholic mother) played by Bette Midler. Billy is forced to move to a “red state” to live with his Southern father in a small town where Christ is king and girls are homecoming queens — that is, until Billy decides to run.

Produced by Drew Barrymore, “Freak Show” was the directorial debut of Trudie Styler (who also happens to be the wife of Sting). She sat down with Georgia Voice to discuss the film.

Georgia Voice: When I screened the film, I was awestruck that this was the first film that you directed and that you actually stepped in to direct it at the 11th hour?

Styler: I did. I was already on board to produce it, so we’d already done a lot of the foundation work with the story and writers. There was a director in place and then, the director had another commitment to a movie that he had been nurturing and that one, he felt, was more timely than ours. That left a vacancy for the director’s chair.

As I worked so hard with him on it and in my life as a producer and an actress, I felt like they might consider me. I am hands on, I’m creative, I know a lot about this film and, frankly, I felt it might be time. So I asked them to kindly consider my request. I was so touched by their response, which was a very enthusiastic “Yes, please!” Once I felt their enthusiasm, that gave me additional confidence to jump in and get started.

Was there ever a point when you ever doubted your ability?

There was no time to doubt anything because by the time we had this change, we had started pre-production and didn’t have a cast. The first thing that I did was enlist the wonderful Bette Midler, who triggered some of the finances, obviously.

The next thing was to look for our “Billy.” That was quite the challenging task. We certainly saw a lot of great young actors but it’s such a monumentally big part going through the A to Z of emotions, colors, textures and nuancing – he’s always on the screen. The role needed an actor of great dimension. I flew to England to audition some actors there. When Alex Lawson walked in, I think within about five minutes, I really felt, “Oh, this is Billy.” I don’t think we were wrong about that. His portrayal of Billy Bloom was quite extraordinary.

I agree! And the casting of Larry Pine as Billy’s father was perfect. It’s uncanny how much they look alike and how well they worked off of each other.

Oh thank you for saying that! It’s also been said before and we have the wonderful Avy Kaufmann to thank for the casting.

I was delighted by John McEnroe’s performance. I wouldn’t expect that a former tennis superstar would play the coach in such a convincing way. Was that his acting skills or was it your acumen as a director?

I’ve known John for many years. I had this notion that this retired athlete could sort of find his way into a high school. I called his agent and asked if he thought John would consider this. He said, “Obviously, to play himself?” I said, “No! I don’t want him to play himself! I want him to play Coach Carter.” He said, “Oh, that’s a first! You’d better ask him yourself.” I called John to ask and he said, “Well, I don’t know. What’s [the character] like?” I said, “Well, he’s kind of obnoxious but he’s got his heart in the right place and I think you could easily do that, John.” [laughs]

He was such a good sport and I do think he’s given a very realistic performance. He was a dream to direct. He didn’t mind whatever I threw at him, whatever I said. He was completely professional about that.

One of the things I really liked about the film, as I started watching it, I felt the familiar plot formula begin to unfold. I had my ideas about how things would happen between characters. I loved that it didn’t happen the way I expected it to. It sort of happened how it might in real life where you don’t always have huge, dramatic victories. As a lesbian, my victories might be that I make an unexpected friend in someone who is very religious or maybe get unexpected support from straight allies.

Exactly. We wanted to reflect how life is and not how life is in a rose-tinted world. Of course there were stars in Billy’s eyes for Flip, but ultimately, Flip is discovered to be an incredibly decent person who becomes Billy’s champion. We all know the great value that we put in real friendships that are enduring and takes us through our lives. We can fall in love and out of love as youngsters and those relationships do not endure. The writers and I felt it was very important that we portray something that is more in keeping with the realism of life.

When we look at the character of Celia Weston’s Florence, it’s juxtaposed to the awful, Bible-thumping fundamentalist Lynnette, brilliantly played by Abigail Breslin. Florence, who is a real Christian, shows Billy lots of compassion even though she doesn’t really understand who he is. She doesn’t judge him. She’s kind to him and becomes his great ally.

She also reminded Billy’s father, William, that Billy was the son that they prayed for and that it was Florence who taught William how to pray. The good aspect of spiritual teaching and Christianity rears its head there. I think that there’s a lot of bad stuff written nowadays about religion but, of course, there is always an upside to religious or spiritual paths when they’re at their best. Kindness and compassion, understanding, not judging… it’s there but sometimes, the more obnoxious voices drown out that quiet strength.

When I came out of the closet as a lesbian, I was married to a fundamental evangelical Christian and going to a church that practiced “Biblical discipline.” They sent elders to my parents’ house to meet with me to ask me to repent of being gay. I told them that would be like me trying to repent for having green eyes. So they held a public worship service where they prayed for the death of my sin, including my physical death.

Yes. The church helped connect my ex-husband with an attorney. I lost custody of my children. I hadn’t worked outside the home, had no education, no money, nothing. I had to leave with only my car and my clothes. So the scene where Florence had that conversation with Billy’s dad about how he was the son that they prayed for, it made me remember that although my experience in church ended badly, I did have many such uplifting and positive moments with other ‘Florence’ type of Christians. It also made me curious that when you premiered the movie in Berlin, did people believe that things like this really do happen in “red states”?

Well, Shannon, first of all, that story you just shared with me has really shaken me and thank you for sharing some of your personal story. Gosh, what a lot you’ve been through! That’s quite something.

To your question about Berlin vis-a-vis homophobia and the red state – we never mentioned where it is. I didn’t want to mention where it was. There’s no point. It’s like exonerating one and blaming another. It’s not what this movie’s about.

In Berlin, I was criticized by young [15-16 year-old] members of the audience. They said, “Come on! This is far-fetched. People aren’t homophobic anymore. That all happened over 30 years ago! This movie isn’t up to date, anymore.”

These young people were raised in an atmosphere of absolute libertarian equality. Women have absolutely as many rights. All thanks to the formidable Angela Merkel, who has held that seat for at least a dozen years and will probably will be re-elected soon. Germany has certainly repaired itself emotionally to the extent that its 15-year-olds there can say “Homophobia? What? Nonsense!”

Although great that they feel that they live in a much fairer environment, more power to them. But we know the reality is that it’s certainly not the case in the United States and in many other parts of the world.

One last question about the religious undertones in the film: it didn’t escape my notice that when Billy returned to school after being beaten into a coma, there was an anti-bullying pep rally for him and then you had him in the cafeteria surrounded by kids in a scene that looked exactly like DaVinci’s “Last Supper” painting. Tell me about that symbolism.

You got that! Yes! Billy listened to Flip who told him, “Start wearing an Izod and blue jeans and the guys will accept you; you’ll be fine.” So he complies. He’s got his t-shirt and blue jeans on when he returns to school.

While he’s been recovering in the hospital for a month, everyone has had a big talking to about bullying. So we put him in the middle of the table in the place of Jesus and we re-created the DaVinci tableau. I did it because he comes back and within seconds, the bullying begins again and he’s betrayed. And ultimately, he’s betrayed by Flip (who is in the position of Judas in the painting scene) when he yells out, “Get off me, you homo!”

It’s a little nod to it’s not if you’re gay. It’s not what you wear. It’s who you are. And he gets called out even though he’s in the uniform du jour of jeans and a t-shirt. That wasn’t going to stop it. And later on, when he’s wearing that ravishing mermaid dress, he says, “No. I’m sick of it. I got chased away at school and I was wearing jeans and a t-shirt. I can’t handle this anymore.” Then he says rather naughtily, “Now let’s have a drink!” [laughs]

I loved that scene. The bubbles made it. I know you need to go, but is there anything that you would like to say to the LGBT community in Atlanta and, specifically, to the people who will be screening your movie at Out on Film?

Please let everybody know that it’s only because of another travel commitment that I cannot attend. I am so proud of the fact that the movie will be screened at the festival and I’ll be there in spirit. I hope to see you guys the next time. I truly am sorry not to be with them. I love to know how it plays. Fingers crossed, I hope it will play well and that Atlanta will be a good audience for it.