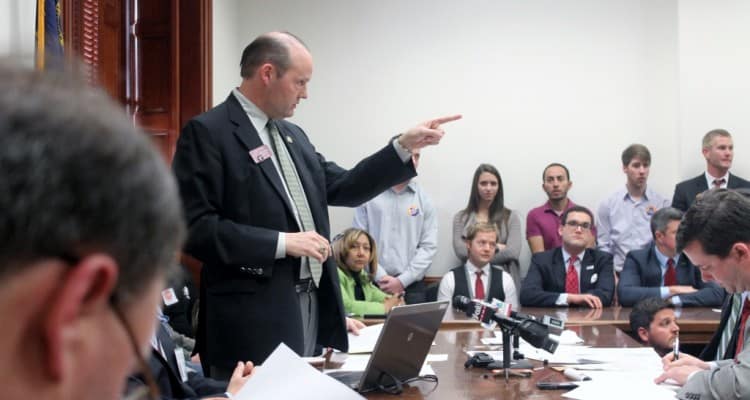 It began with an anti-gay “religious freedom” bill and ended with an anti-gay rant by a fire chief, but 2014 had plenty more going on in-between for Georgia’s LGBT community. Nine ordinary people stepped up to challenge the state’s same-sex marriage ban, a gay band director fought back, and a transgender teen broke a barrier. Viral videos saddened us and election results didn’t go our way, but you know what they say—there’s always next year.

‘Religious freedom’ bills fire up the community before failing to pass

A controversial pair of bills that many believed could be used to discriminate against the LGBT community was introduced in the Gold Dome. The so-called “religious freedom” bills were introduced early in the 2014 session by Republicans—state Sen. Josh McKoon and state Rep. Sam Teasley.

Both bills died; however, Sen. McKoon has vowed to reintroduce his bill in the 2015 session.

Georgia Attorney General Sam Olens filed a motion to dismiss the lawsuit in July. Since then, both sides have filed briefs back and forth referencing decisions in other districts. However, the case is in a holding pattern as the court considers Olens’ motion to dismiss, and Judge William Duffey has put a stay on all other proceedings until he rules on the motion.

Two transgender women were attacked on a MARTA train in May by several men who were harassing them because of their gender identity. A cellphone video of the incident subsequently went viral.

Flint Dollar, a gay band director at a Catholic prep school in Macon, was fired in May due to his plans to marry his partner.

The uproar led to a Facebook page and Change.org petition, and three members of the school’s board of trustees resigned.

Dollar filed a claim with the Equal Employment Opportunity Commission against the school, citing gender discrimination. The claim is pending. Dollar married his partner in July in Minnesota.

A YouTube video emerged in August in which Daniel Pierce, a gay Rome, Georgia teenager, was attacked by his family during what he later called an “intervention” over his coming out.

Pierce is now a board member for Lost-N-Found Youth and was recently accepted into Kennesaw State University.

The HIV-prevention drug regimen PrEP started to generate a significant dialogue, and in May it was endorsed by the Centers for Disease Control and Prevention. However, HIV/AIDS activists called a press conference the following month, saying the CDC had been “plodding” in its response to alarming infection numbers.

A September CDC report painted an even darker picture for HIV rates locally, saying that Georgia was lagging behind other states in linking people with HIV to care and retention in care, but ranking among the highest in death rates for those with AIDS.

On a brighter note, Atlanta-area HIV/AIDS organizations Positive Impact and AID Atlanta both announced expansion of services, and both either moved to larger facilities or renovated existing ones.

Transgender East Cobb teenager Sage Lovell inspired hope in October when she was elected to Walton High School’s homecoming court, making her the first transgender Georgian to do so.

Lovell’s coming out provided a potential blueprint for others in similar situations, as she had her parents’ support from the beginning, the school had a strong anti-bullying policy and gender-neutral restrooms, and friends and fellow students either supported her or the matter just didn’t concern them.

Atlanta Fire Chief Kelvin Cochran was suspended for one month without pay by Atlanta Mayor Kasim Reed and ordered to take sensitivity training in November after anti-gay passages surfaced from a self-published book Cochran wrote.

In the book, “Who Told You That You Were Naked?” Cochran calls homosexuality “unclean” and compares it to pedophilia and bestiality in one passage, and calls same-sex relations “vile, vulgar and inappropriate” in another.

The results of a full investigation into the matter have not been released as of press time on Dec. 16.