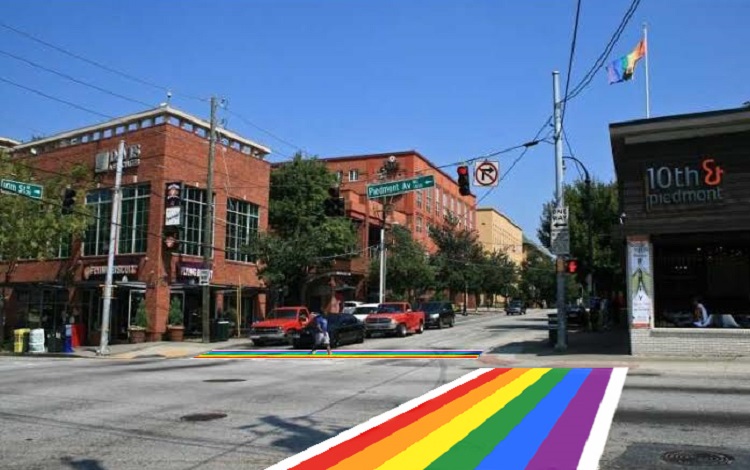 Splashes of color appear to be coming to Atlanta's 10th Street and Piedmont Avenue, known as the corner of gay and gayer, with the installation of rainbow crosswalks.

Robert Sepúlveda, founder of RSJdesign, has been working with the city of Atlanta for nearly a year to find a way to mark the epicenter of LGBT Atlanta with the colors of the rainbow and it appears the project is about to be greenlit by city officials.

In an email interview with Georgia Voice, Sepúlveda explained how he got the idea, the people he's worked with to make this a reality, and how the public's support will be needed to fund the project.

Rainbow crosswalks have been painted in cities including Seattle, Key West, Philadelphia, and the Castro in San Francisco. Sepúlveda says it is time for Atlanta to join these cities in showing its pride in a very visible way.

Where did you get the idea for the rainbow crosswalks?

I'm always traveling and on the go and I've seen the crosswalks in many other cities, both domestically and internationally. I saw the significant benefits it brought to the local community and I didn't understand why Atlanta didn't have one with such a big, diverse LGBT population.

Why do you think it's important for Atlanta to have this?

Atlanta has one of the highest LGBT populations per capita, ranking third among major American cities, behind San Francisco and slightly behind Seattle, with 12.8 percent of the city's total population recognizing themselves as gay, lesbian, or bisexual.

But let's not just talk figures. Atlanta is in the center of the Deep South with religion being at the core of many family's bonds and there are very rural areas only minutes away from Midtown. I want everyone to know, whether they are closeted, bi, trans, lesbian, etc.; whether they are too afraid to share who they really are or too to afraid be who they really want to be; those that family members disowned or shunned; and like many of us that have faced discrimination that, yes, you are welcome here, you are safe here and you will be treated with love. These crosswalks are not just crosswalks but symbols of acceptance, unity, tolerance and show the diversity of the LGBT community.

When did this process start and what steps have you taken since then to make it happen?

I contacted the city of Atlanta last year with a proposal about installing the rainbow crosswalks at the 10th Street and Piedmont Avenue location in Midtown before Atlanta Pride 2014. That obviously came and went. There have been many hurdles and as you can imagine lots of red tape and city bureaucracy, but alas we are only one meeting away with the City of Atlanta's Urban Design Commission for this project to be completely approved! The city wants this to be a PERMANENT part of the city's art collection. We will also be teaming up with Joining Hearts Atlanta to expand the potential reach of this project and its benefits.

This project has been a personal mission of passion for me. I haven't stopped championing for this project to come to fruition and I won't stop until paint hits the ground. I want to thank everyone that has seen the positive potential these crosswalks will have on our community, not only for the people living in Atlanta, but the many visitors that will cross over them. We will be joining a group of world-class cities that have already implemented these crosswalks.

These crosswalks have also demonstrated significant economic, social and cultural benefits. The 10th Street and Piedmont Avenue intersection has long been the epicenter of the LGBT community in Atlanta. These are not just crosswalks, but a symbol of acceptance, unity and tolerance and reminds us all of how diverse our community is. It's a very small gesture with a very large effect and is a clear message that the LGBT community is welcome and safe in this city.

Have you faced any roadblocks from anyone along the way?

Thankfully the city of Atlanta has been very helpful in guiding me through all the steps that have been necessary to accomplish this goal. Opposition will always be something we face, but we will face the opposition, if any, with respect and dignity.

What allies have helped the project along?

Robin Shahar, [Mayor Kasim Reed’s] advisor on LGBT issues; Eddie Granderson, program manager for the city's Public Art department; Camille Love, executive director of the mayor's Office of Cultural Affairs; and Wes Berry, president of Joining Hearts, have all helped this process along to where it is today.

What happens next and how soon could this happen?

The next hurdle would be the Commission Urban Design meeting on August 5. This will be the last meeting before the project gets greenlit. After that I have joined with Joining Hearts Atlanta — they have an outstanding reputation in the community and have deep roots in the Atlanta LGBT community. Together we will host fundraising benefits along with acquiring corporate and private sponsorships. The city of Atlanta is not paying for this project so [we] will have to find the resources with individual sponsors.